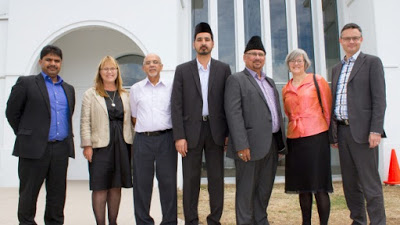 New Zealand’s Ahmadiyya Muslim community, which is based in Manukau, says it opposes the temporary halt of entry to the US by people from seven predominantly Muslim countries as well as refugees.

National president Bashir Khan says such restrictions are a violation of basic human rights that in some cases affect vulnerable people seeking refuge from injustice, violence and persecution.

“At a time when many of the world’s nations are ravaged by war, famine and religious intolerance, the last thing we needed was more divisive measures.

“We stand together with anyone who faces persecution in any form.”

The Federation of Islamic Associations of NZ says it considers the US travel restrictions to be a “Muslim ban”.

Nine of the 26 Islamic centres that comprise the federation, which is led by president Hazim Arafeh, are in South Auckland.

The way the policy was implemented has split families, stranded thousands of travellers, and was a heartless decision, he says.

“The US â€¦ has been widely recognised as the leader of the free world, a beacon of democracy and freedom of religion.

“However this latest decision to ban Muslims does not inspire confidence and is unbecoming.”

Shaw says he wanted to hear their concerns about international events and express support for them and all of New Zealand’s migrant communities.

Shaw says Kiwis may be a long way from the US but it’s easy to feel concerned about Trump’s policies.

“Now, more than ever, we need to support diversity and inclusiveness of people of all faiths and nationalities.”

Prime Minister Bill English discussed the travel ban, which is being legally challenged in the US courts, with Trump during a phone call on February 7.

He says he told Trump he does not agree with the policy.