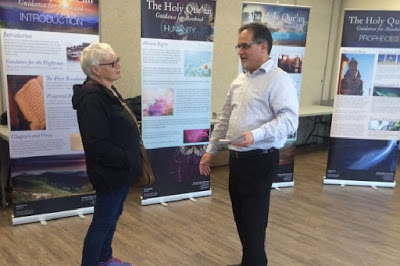 Seeking out empathy in a time of terror

Generalizations, generally speaking, are worthless. For every example of someone from a certain group acting one way, thousands of people from that same group will do the opposite.

That prejudicial thoughts and actions can be so easy to slip into doesnâ€™t make them right. A simple antidote is to shut off the TV, log off social media and have a face-to-face conversation with a member of whatever group makes you angry or afraid.

Thatâ€™s what happened on Saturday in Port Dover. Nine members of the Ahmadiyya Muslim Community came to the library to chat with residents and answer any questions they had about Islam.

The visit came on the heels of U.S. president Donald Trump instituting a ban against travellers from seven predominantly Muslim countries â€“ including Syrian refugees â€“ and the shooting at a Quebec mosque that left six dead and five badly wounded.

One of the Ahmadiyya Muslims said he is afraid for what continuing incidents of Islamophobia will mean for the vast majority of Muslims in Canada and worldwide who are simply trying to live their lives in a peaceful manner.

The fact that Islam is a religion of peace isnâ€™t always easy to remember. Not when our entertainment is full of stereotypes of nefarious Muslim villains, newscasters who share breathless reports of terrorism perpetrated by (and overwhelmingly against, it ought to be noted) Muslims, and a litany of commentators preaching intolerance toward followers of Islam.

The attack in Quebec ought to have banished any lingering belief that racism and hatred canâ€™t be found in Canada, too.

Our multicultural society is rightly praised, but we canâ€™t be complacent. We must reaffirm and strengthen our commitment to genuine inclusion through government policies â€“ taking in more refugees, for a start â€“ and small actions like chatting with newcomers or those who may feel excluded from public life.

The aim of the open house was to demystify, not to convert, and itâ€™s fair to say residents and visitors alike left with some myths dispelled and new perspectives to consider.

Propagandists seek to sow division by denigrating certain groups as less than human. We must firmly insist that everyone on Earth â€“ whatever our differences â€“ shares a common humanity.

Weâ€™re all just people, after all.

If you catch yourself forgetting that â€“ easy to do as the contagion of intolerance fills the airwaves and the internet â€“ take the time to speak with someone who on the surface isnâ€™t like you.

Norfolk may not be as diverse as bigger cities, but there are people here who hail from many parts of the world, practise many different religions, identify along every part of the sexuality spectrum, and live with a wide range of physical and mental challenges.

Spend even a few minutes getting to know someone unlike you, and odds are the tension you might be feeling toward them will dissipate, and youâ€™ll find it easier to reject stereotypes in the future.

As a bonus, you might even make an unexpected new friend.