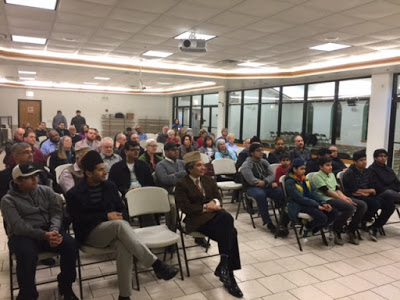 Imam Shamshad and Yasir Malik president of the south west chapter of Chicago welcomed the gathering and expressed their gratitude to each of the guests for their overwhelming support.

“We Are Proud Of Our Neighbors” — Imam Shamshad of Ahmadiyya Muslim Community.

Pastor Scott of United Methodist Church, Glen Ellyn had reached out to Imam Shamshad earlier in the week and raised his concerns about the recent situations about Muslims in the Unites States. He promised to support and stand beside Muslims in such hardship and asked Imam Shamshad if he could help us in anyway. To his offer, Imam Shamshad suggested to hold an Interfaith Prayer Service in Ahmadiyya Muslim Mosque in Glen Ellyn Chicago area,and invited the Pastor and Â his congregation. He also invited other religious leaders from around Glen Ellyn. 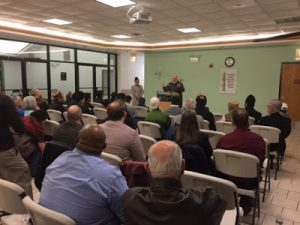 On Thursday, February 2, 2017, an Interfaith Prayer Service was held by Ahmadiyya Muslim Community in Masjid Bait-ul-Jaamay, Glen Ellyn. Around 50 Guests belonging to different faiths attended the Prayer Service and promised to provide their support in whichever manner they could.

Imam Shamshad and Yasir Malik president of the south west chapter of Chicago welcomed the gathering and expressed their gratitude to each of the guests for their overwhelming support. Later Imam Shamshad addressed them and said, Islam teaches every Muslim to obey the laws of the Country they live in and accept their authority.

He mentioned a Quranic verse which says:

â€œO ye who believe! obey Allah, and obey His Messenger and those who are in authority among you. ” — (4:60)

As per this verse, all the Muslims are bound to follow their Authorities even if they are not Muslims. 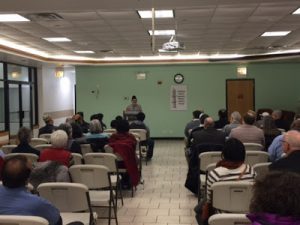 Imam shamshad also quoted a statement of the Worldwide Head of the Ahmadiyya Muslim Community, His Holiness Hadhrath Mirza Masroor Ahmad which he made on October 13,2015:

“All genuine refugees should be helped by Governments and International Organizations. They should be allowed to settle until peace is restored in their home countries. However, it is also important that the Authorities remain vigilant and monitor the refugees to ensure that extremists are not allowed to settle under the guise of asylum.”

Pastor Scott of united Church of Christ was the first speaker who express his feelings and thoughts about current conditions of the Muslims in the country and lead the prayers. Pastor Hong-Kien Jeremiah Lee of united Methodist church Â and other religious leaders and their congregations also spoke and prayed. They addressed the gathering and expressed their concerns and promised to provide their complete support in order to promote peace, harmony and brotherhood among the society. Prayers were offered together by all the attendees. Imam Shamshad and Â members of Ahmadiyya Muslim congregation thanked all the guests of their unconditional help.

Six copies of the Holy Qurâ€™an with English Translation and other literatures ,Muslim Sunrise, True Islam, Message of Peace, Muslims for Life, Muslims for Loyalty were freely distributed among the Guests. Refreshments were served to all.