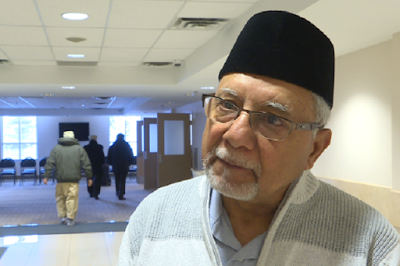 “Just seeing how many different, diverse people there are here. It just opens my eyes. It helps me understand â€” a bit more â€” some of my friends at school.”

In the wake of last Sunday night’s deadly shooting at a mosque in Quebec, an Ahmadiyya mosque in Calgary opened its doors today, inviting the general public to come in and dispel any misconceptions they may have about the religion.

It was an opportunity for 14-year-old Hunter Grigor, who lives in the neighborhood, to enter the Baitur Nur Mosque for the first time.

“Just seeing how many different, diverse people there are here. It just opens my eyes. It helps me understand â€” a bit more â€” some of my friends at school.”

Hunter’s mother, Kathy Grigor, regularly attends church and said it was important to bring her son to the event in the light of the Quebec City tragedy.

“It doesn’t matter how a person worships, nobody deserves that,” she said. “I disagree wholeheartedly with targeting a person based on their belief.”

The Grigors appeared to be the only two non-Muslims to attend the “Visit A Mosque” event.

Sultan Mahmood, a leader at the mosque, had hoped for a larger turnout at the open house, but said he still felt the event was worthwhile.

“For me, one person comes, can be educated, and have the urge to learn, that helps.”

Mahmood said that since the Quebec City shooting, his mosque has received numerous messages of support by phone and email from the broader community.

“That is very heartening,” he said. “That gives you a lot of confidence that we are not alone,” Mahmood said.

“Whatever loss we have had, this kind of response overcomes that.”

Mahmood said he believes opening the mosque’s doors can go a long way toward addressing any fears or misunderstandings that people may have about Islam.

“I think it becomes our responsibility to reach [out] to the people and tell them we’re just like them. There is no difference.”

Friday’s event is just the latest opportunity that Calgarians have had to stand in solidarity with the local Muslim community.

On Monday, roughly 500 attended a candlelight vigil at city hall. The next day, an inter-faith prayer was held at the Akram Jomaa Mosque in the city’s northeast.

With files from Kate Adach