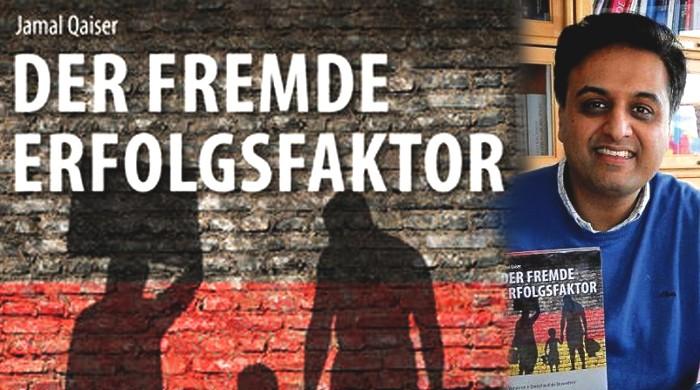 The German Economic Forum has proposed Pakistani-origin author Jamal Qaiser’s book Der fremde ErfolgsfaktorÂ (The Foreign Success Factor) for the nomination of the literature novels of Nobel Laureates in Literature in Stockholm.

With Germany’s population registering both hot and cold temperatures towards refugees and Donald Trump’s suggestion that German Chancellor Dr. Angela Merkel’s policy regarding refugees is â€œutterly crazy,â€ the attitude towards asylum seekers and individuals migrating to Germany is often characterised by pessimism and hopelessness.

Finding inspiration for achievement and success among young migrants to Germany is, therefore, even more encouraging against this backdrop.

In a statement, the Economic Forum Deutschland gem. e.V. said, “It is our honor to propose Mr. Jamail Qaiser’s book Der fremde Erfolgsfaktor for the nomination of the literature novels of Nobel Laureates in Literature in Stockholm.â€

Qaiser, who was born in Pakistan, shows not only the way forward, encouraging all migrants to Germany, but also demonstrates that diversity â€“Â or being a foreigner in Germany â€“Â has distinct advantages.

The author shared his feelings with Geo News, stating he is very proud of the fact that from all over Germany, his book has been selected as a nomination.

Speaking on Pakistani diaspora living in Germany, Qaiser said that immigrants can be a great asset for Germany, especially students coming in for higher education in large numbers every year. He added that by making legal immigration easier, the country can make sure that young graduates and skilled immigrants from Pakistan find good opportunities in the German job market.

Himself being a migrant, Qaiser went through the complicated German school system. He first worked as a salesman in the Frankfurt flea markets, then went for higher education at Harvard Business School, and finally returned to Germany as an entrepreneur and investment banker.

He extends encouragement for fellow migrants in four points:

At the Frankfurter Book Fair, getAbstractÂ â€“ a company creating business books’ abstracts â€“ awarded Qaiser one of their only two German book awards for 2016.

Final nominations of the literature novels of Nobel Laureates in Literature in Stockholm will officially be released later this year.