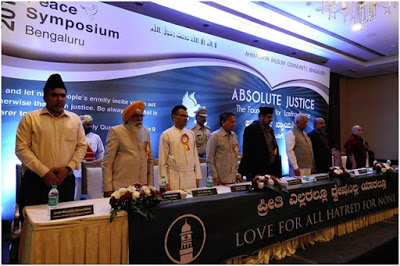 The Honâ€™ble Governor of Karnataka Shri. Vajubhai Rudabhai Vala attended the Peace Symposium 2017 organized by the Ahmadiyya Muslim Community, Bangalore at The Grand Magrath Hotel on Sunday the 29th of January.

The topic of the Peace Symposium was â€œAbsolute Justice â€“ the Foundation for Lasting Peaceâ€. Mr. Shiraz Ahmad, the Additional Executive Director of the Ahmadiyya Muslim Community India was also present for the event.

While addressing the gathering, the Honorable Governor of Karnataka expressed happiness at the efforts of the Ahmadiyya Muslim Community towards establishing World Peace and appreciated the efforts made to bring people from different social backgrounds for the symposium.

He also shared valuable advise with the audience and emphasized that every Religion in itâ€™s essence preaches love and peace, and that there is a need for respecting basic human values, our families & most importantly, to respect our mothers & women in general. He also vowed that the peaceful message of this program should not merely remain confined to such Symposiums, instead it should be carried far & wide by everyone present.

He was presented with the Gujarathi version of the Holy Quran and mementos for the efforts of upliftment of Peace in society, by Shiraz Ahmad.

Although the worldwide head of the Ahmadiyya Muslim Community, Hazrat Mirza Masroor Ahmad was not personally present for the program, a documentary containing his message for world Peace was presented before the audience.

The Keynote Speech was delivered by Mr. Shiraz Ahmad, the Additional Executive Director of the Ahmadiyya Muslim Community India.

In his speech, he mentioned that the foundation for lasting peace rests upon the creation of a bond with our Creator and His creation (through service). He also emphasized the fact that Islam rejects all forms of terrorism and supported this view by quoting the following verse from the Holy Quran: â€œWhosoever killed a personâ€¦ it shall be as if he had killed all mankind.â€ (5:33).

There was good media coverage as well, as 7 popular newspapers have printed the new in their papers