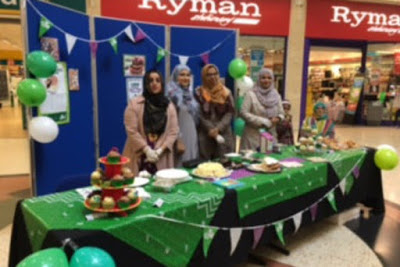 Ahmadi Muslim Women throughout the North West of England are gathering from all walks of life at Darul Aman Mosque in Manchester for an afternoon that will shine a light on a â€˜Pathway to Peaceâ€™ through fundraising for charities, including Macmillan.

The Charity Peace Fair will be held on Sunday 29 January 2017. The afternoon will show how women can raise funds and give the charities a platform to talk about their work. The community’s own charity Humanity First will showcase how peace can be achieved in the 21st century.

The event will also allow guests to have a guided tour of the mosque and give visitors a chance to get to know and understand the true values and beliefs of Muslim women. Exhibitions will also be available that will showcase the activities of the Ahmadiyya Muslim Womenâ€™s auxiliary organisation (Lajna Imaillah).

The Ahmadi Muslim women have worked tirelessly with the greater community and various womenâ€™s groups Â on multiple charitable endeavours including gifts to hospices, volunteer work at food banks, multi-faith coffee mornings as well as raising funds for various charities including Macmillan, Red Cross, Oxfam, Homeless, Refugees and many more.

Mrs Samina Irfan, Regional President Ahmadiyya Muslim Women Association said: ‘Peace is at the core of our belief and practices and we are reaching out to women in the North West. Members of our community across Britain are engaged in similar local charity initiatives in a show of peace.’

If anyone would like to attend the event then they should get in contact with Press Officer Rubina: ahmedi.email@hotmail.co.uk Â 07514450731