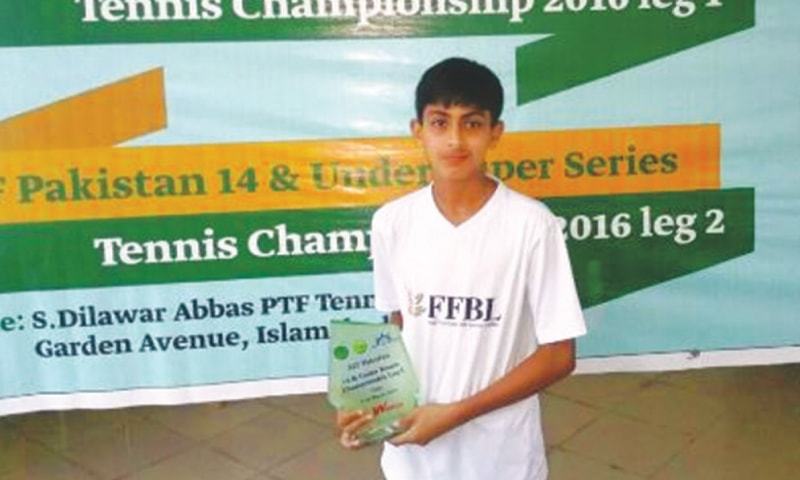 ISLAMABAD: In a cricket-crazy country like Pakistan, tennis has not been able to get its due with only an odd icon like Aisam-ul-Haq making waves on international circuit. However, there are still youngsters in this countryâ€™s folk who want to turn professionals and aspire to excel like worldâ€™s top stars.

Huzaifa Abdul Rehman is one of them. The 14-year old is Pakistanâ€™s top junior player and has been outstanding in the last couple of years. He has already jolted the tennis circuit at the Asian level by winning six Asian Tennis Federation (ATF) tournaments in 2016, five of them held outside Pakistan.

Currently the No.2 junior Asian player, Huzaifa idolises Swiss great Roger Federer and aims to be like him. â€œHe is my ideal and I want to shine in the world of tennis like him and though Federer is currently not among the worldâ€™s top ten players, he is undoubtedly the greatest tennis player of all time,â€ he said of the legendary Swiss player who continuously remained in top 10 from October 2002 to November 2016 and also held the number one position for 302 weeks â€” a world record in the sport.

Huziafa, who represented Pakistan in the International Tennis Federation (ITF) 14 and Under Junior Development Series division 2 in January last year and claimed a silver medal in the coveted event, said he is training hard to accomplish what his role model (Federer) achieved after turning pro in 1998.

â€œI believe Iâ€™m on course to achieve what he did in his life,â€ says the confident youngster. â€œIâ€™m training for at least five hours every day and the more I train, the more my desire to become like Federer grows.â€

But Huzaifaâ€™s father Col Mohammad Faisal believes that despite being highly talented, his son will only match the great Swiss playerâ€™s accomplishments if he has the proper financial backing.

â€œFinancial support becomes crucial when a player takes a step from a budding youngster to a tour professional,â€ said Faisal. â€œWhen you donâ€™t have the money to get top level training and to play the professional circuit, your dreams are unlikely to materialise.â€

Faisal said training in foreign countries involved a lot of money and a common Pakistani could not even think of it. â€œAn aspiring youngster requires at least $3000 per month only for group training in a state-of-the-art academy to polish his skills. But if he wishes to hire a coach, then heâ€™ll have to spend three times more than that.â€

At home Huziafa is groomed by Faisal at the tennis courts of Mangla Cantt. When he is in Islamabad he is trained by former Pakistan No.1 and ITF Level II coach Asim Shafik who has a high opinion about his pupil and feels he has all the potential to become a tennis icon.

â€œHuzaifa is a highly talented kid and when I see his commitment and devotion to the game, I know that one day heâ€™ll become a great player. The good thing about him is that he spends a lot of time in training. Iâ€™ve no doubt in mind that hard work will pay off and heâ€™ll rise in world tennis,â€ Asim added.

Huzaifa also feels that tennis facilities in Pakistan are not at par with international standards and youngsters need sponsorships to get good training abroad and to pursue their dreams. â€œWe can produce great players like Federer, Novak Djokovic and Andy Murray but money is a big hurdle,â€ he remarked. â€œHopefully things will work out for me better if I get good sponsors.â€