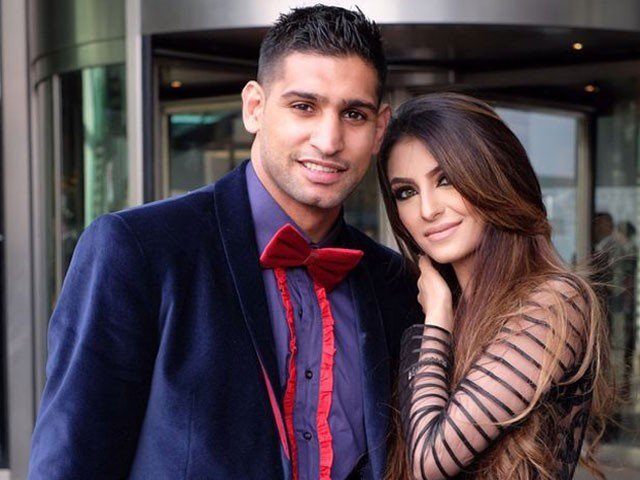 The ongoing feud between boxer Amir Khanâ€™s wife, Faryal Makhdoom and his family has taken a new turn. Talking on the This Morning TV show recently, Faryal attacked the boxerâ€™s family yet again.

According to Dailymail.co.uk, the beauty v-logger was called an evil wife by Amirâ€™s father, Sajjad Khan in an exclusive interview with the publication.

â€œShe is pushing Amir to the limit with her accusations and I feel very sorry for my son. It is not fair. While he is working so hard with his foundation, helping people he doesnâ€™t even know but who are so deprived and he just wants to make them happy, look what his wife is doing?â€ said Sajjad.

â€œSheâ€™s not picking up the phone or calling us to try and make amends. Now, with her big ego sheâ€™s gone on national TV and is stuttering through the interview. Itâ€™s crazy. She said sheâ€™s doing it with her husbandâ€™s blessings but I donâ€™t think so.â€

However, Sajjad and his manager have called out all the accusations false, saying that he tried to reason with his daughter-in-law, but it was of no use. â€œShe is trying to come between us, she is trying to break up the very close relationship we have with Amir. She is a very evil woman. I have given and taken with her. We all have. All she wants is the limelight.â€

Sajjad added, â€œHeâ€™s tried his best to calm things down but she goes against him. Sooner or later I wouldnâ€™t be surprised if he just wants out. The writingâ€™s on the wall.â€

Talking about the trouble in his sonâ€™s marriage, Sajjad said that the only problem is that his Faryal will not change.
â€œShe should be doing the best for her husband and sheâ€™s not. I donâ€™t want to see them get divorced for their daughterâ€™ sake. I hope they donâ€™t get divorced, absolutely not. I hope they live happily after for the rest of their lives.â€

Upon his arrival in the UK, the former unified light-welterweight world champion will have a talk with his family about the allegations made by Faryal.

â€œAmirâ€™s back and forth all the time, here, there and everywhere but whenâ€™s heâ€™s got time weâ€™ll sit down and talk,â€ said Sajjad.

â€œWeâ€™re very close and if there are problems he canâ€™t cope with heâ€™ll tell me.â€

Have something to add in the story? Share it in the comments.