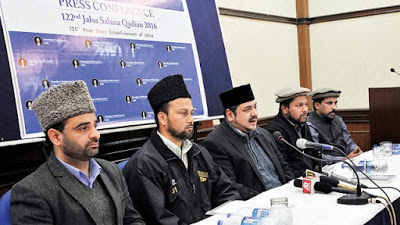 The objective of this jalsa or the congregation is to present the peaceful teachings of Islam. Likewise to call people towards their creator, to develop love and affection and promoting brotherhood are among the noble objectives.

The Ahmadiyya Muslim Community has declared support to Uniform Civil Code (UCC), saying the loyalty to the nation is also an important constituent of the faith.

Opposing the rigid stand of the All India Muslim Personal Law Board (AIMPLB) and other Muslim groups, leaders of the community on Tuesday said the Islamic Sharia (laws) were liberal enough to accommodate solutions to the evolving problems.
…
The Chief Secretary of Ahmadiyya sect Shiraz Ahmed said there was no sanction to triple talaq in one go. â€œWe recognise that Islamic law can be interpreted as per requirements. We must bring real Islamic teachings to the knowledge of government and public, where it is mentioned that granting divorce to a women must have gaps, to allow reconciliation and rapprochement,â€ he said.

The community is organising 12th annual congregation on December 26-28 in the Qadian city, where participants from 50 countries are expected to arrive, including a large delegation from Pakistan. Last year, around 5,000 people from Pakistan had attended the event but this year their confirmation is yet to received, said Tariq Ahmad Ahmadiyya, spokesperson of Ahmadiyya Muslim Jaamat India.

â€œGenerally their confirmation is received late as border clearance issues are to be managed. But those coming by flights will definitely participate despite the tension between the two countries,â€ he said.

The event will be marked by a world religions session in which people from different faiths will suggest solutions to the problems faced by world, Shiraz added. On the last day, a televised address will be given by Hazrat Mirza Masroor Ahmad, worldwide head of the community based in London. â€œThe message of love and loyalty towards ones nation will also be emphasised during the discussions at the event,â€ Shiraz said.

The objective of this jalsa or the congregation is to present the peaceful teachings of Islam. Likewise to call people towards their creator, to develop love and affection and promoting brotherhood are among the noble objectives, said the organisers.

Rejecting that there was any political motive or an attempt to confuse Muslims, organisers said the gathering had no other motive, but spiritual where people from all over the world will participate. The community spans over 209 countries.