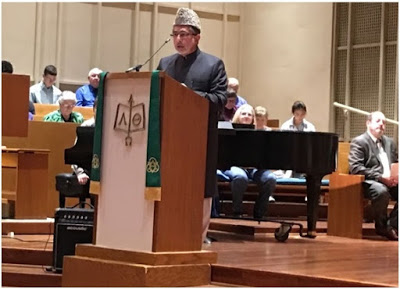 A youth group from the Ahmadiyya Muslim Community sang a song in Urdu language, which was translated and printed in English for the audience.

Other spiritual traditions were represented by faith leaders from the Jewish, Christian and Native American communities. The program was sponsored by the Claremont Interfaith Council (CIC) and hosted by the Claremont Presbyterian Church.

Following a welcome address and reading of the CICâ€™s â€œStatement of Understandingâ€ by CIC president Rev. Lara Martin, Claremont Presbyterianâ€™s Rev. Krista Wuertz led an audience-participation prayer entitled â€œA Litany of Thanksgivingâ€ that highlighted the many reasons and blessings we have to be thankful to God for in our daily lives.

This was followed by a Native American Prayer song led by Alfonso Villanueva, a Purepecha Elder, Chief Tony Cerda, Costanoan Rumsen, and Trevor Thomson, a Yurok Elder.
A Thanksgiving Proclamation, read by Claremont Mayor pro-tem Larry Schroeder, was followed by readings on the topic of â€œThankfulness to Godâ€ from the sacred texts of the three Semitic religions, Judaism, Christianity and Islam.

Cantor Paul Buch read in Hebrew from the Torah, Rev. George Silides read Luke 12:16-31 from the New Testament, and Imam Zafarullah from the Ahmadiyya Muslim Communityâ€™s Baitul Hameed Mosque in Chino read 14:8 and 46:16 from the Holy Quran.

Imam Zafarullah also quoted a saying (hadith) of the Holy Prophet Muhammad (pbuh) that stated: â€œIf one is not grateful to people, one cannot be grateful to God.â€

The Imam closed his remarks by saying that God instructs us to be ever-thankful to God for our blessings because all of our blessings ultimately come from God.

A youth group from the Ahmadiyya Muslim Community sang a song in Urdu language, which was translated and printed in English for the audience.

More sacred readings were read out by Rev. Jan Chase from Unity Church in Pomona and by a representative of the Mormon LDS Church. A combined Church choir then presented â€œA Song of Thanks to the Lordâ€ followed by â€œA Thanksgiving Messageâ€ from Rev. Joel Fairley from Claremontâ€™s First Baptist Church.

The event was concluded with a collection of a Thanksgiving Offering and its blessing by Rev. Dong-woo Lee, followed by a congregational song entitled â€œThe Right Hand of God.â€