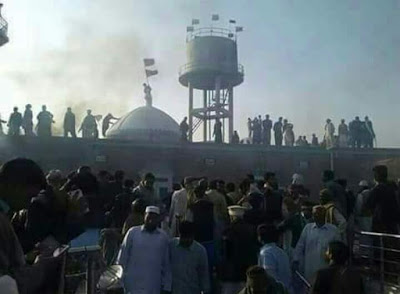 “Appropriate measures were not taken to ensure the safety of Ahmadis in the local area. As a result the mob were given free reign to do as they please while the police were helpless to stop them.”

Chenab Nagar: A place of worship of the Ahmadiyya Community, known as Dar ul Zikr in Dolmial, District Chakwal, has been attacked by a violent mob on the day which marks the birthday of the Holy Prophet (PBUH). In order to occupy the place of worship, shots were fired at and perpetrators pelted the building with stones. Malik Khalid Javaid, who was in Dar ul Zikr at the time, suffered a heart attack during the assault and passed away because he could not receive medical care at the time.

According to reports, those elements who instigated the violence had been encouraging the local community to boycott Ahmadis for some time through an organized campaign. Moreover meetings were held and those who refused to take part in the boycott were threatened with refusal to conduct marriage ceremonies and the denial of their funeral rites.

Early in the day of 12 Rabiul Awwal, more than 1000 people formed a procession to commemorate Eid Miladun Nabi pbuh before attacking the place of worship at around 11 am. Fortunately, police managed to ensure that those Ahmadis inside the building were able to make a safe getaway after which the mob forced their way into the building by pressing the police and set the furnishings of it on fire. Eventually, law-enforcement authorities were able to calm the situation and quell the disturbance. In order to control the situation Pakistan Army and the Rangers also had to be called in.

The Spokesperson of the Ahmadiyya Community Pakistan, Saleem ud Din, said that the attack had been preplanned. Prior to this, the Ahmadiyya Community had informed the authorities that an attack of this nature was being organized but to no avail. Appropriate measures were not taken to ensure the safety of Ahmadis in the local area. As a result the mob were given free reign to do as they please while the police were helpless to stop them.

Saleem ud Din added that despite all of this, Ahmadis in Pakistan and throughout the world continue to persevere and be steadfast in the face of such atrocious persecution through their faith and trust in Allah Almighty. He further added that it is the duty of the government to ensure the rights and safety of its people including Ahmadis who are equal citizens of Pakistan.