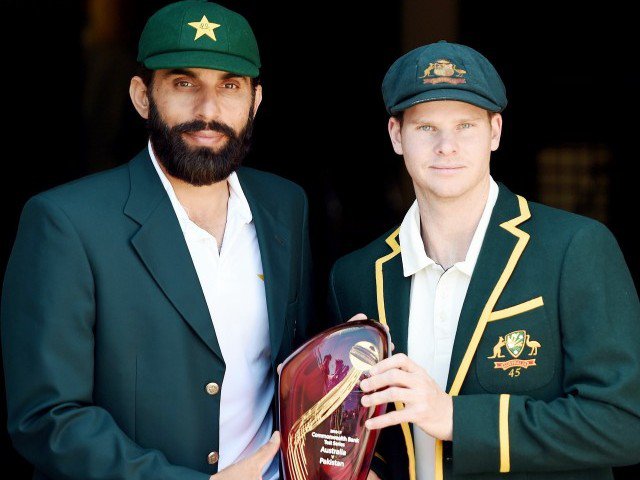 Misbah, who exerts a calming influence on the mercurial Pakistanis, believes the side has developed into one that can finally deliver a series win after 11 fruitless tours to Australia.

Pakistan have won only four of their 32 Tests Down Under and have lost their last nine Tests since their last victory in Sydney in 1995.

No team from the sub-continent has won a Test series in Australia, further underlining the massive undertaking.

But Misbah, who scored just 76 runs in four innings in his only tour to Australia in 2009-10, is confident the tourists can turn things around against Steve Smithâ€™s men, who are themselves emerging from a recent losing five-Test run.

â€œWe took almost six years to develop this team and that team showed a lot to the world when we played in England and in â€˜homeâ€™ conditions in Dubai and Abu Dhabi,â€ he told reporters ahead of Thursdayâ€™s day-night Test at Brisbaneâ€™s Gabba.

â€œSo we have a lot of faith and confidence behind that. These players are experienced enough and they have the belief that they can do it.

â€œWeâ€™ve had some unbelievable successes in the past. I think those victories and those performances always give you confidence, even in Australia,â€ Misbah said.

â€œNo doubt the conditions are tough but once you have confidence and belief I think you can change the history.â€

Much of Pakistanâ€™s confidence flows from the insights coach Arthur has on the Australians after his time as their national coach up to his sacking ahead of the 2013 Ashes series in England.

â€œHe knows the ins and outs of most of the players, he knows their strengths and weaknesses,â€ the captain said.

â€œThatâ€™s always helpful when you have that sort of inside information about the opposition. We feel we have that sort of advantage and heâ€™s giving his input to the players how we need to go about the business. That can really help us in making our strategies.â€

No one has beaten Australia at their Gabba fortress since the West Indies in 1988, but the unique challenge of the first pink-ball Test under lights at the ground makes Pakistanâ€™s chances difficult to assess.

â€œIt is not only the Gabba conditions but also the pink ball, day-night Test match,â€ said Misbah, who at 42 is the oldest current Test player.

â€œThe players are not that much familiar with the pink ball and these conditions. That could be a challenge, especially under lights. Itâ€™s always a challenge when you come to play in Australia because these conditions are totally different from the rest of the world, a bit more bounce and pace here.â€

He continued: â€œYou need some time to get used to these conditions, especially if you are playing under lights and using the pink ball. That could be a little bit tricky, especially for the batsmen.â€

Leg-spinner Yasir Shah is looking to make an impact with the extra bounce from the Gabba pitch.

â€œHeâ€™s a wonderful bowler, he proved himself not only in the UAE but also in England,â€ Misbah said. â€œShane Warne was very successful in Australian conditions because of the bounce he gets from these wickets.â€

He added: â€œWe believe he (Yasir) is the kind of bowler who can make his impact especially in Australia where bounce can play a big role during the series.â€

Australia may unleash an all-pace attack against Pakistan for the series-opening day-night test in Brisbane, home captain Steve Smith said.

Smith expects fast bowler Jackson Bird, recalled for the last test against South Africa, to hold his place in the 11, meaning debutant paceman Chadd Sayers could edge out spinner Nathan Lyon for the match starting at the Gabba on Thursday.

â€œWe want to have another look at the wicket todayâ€¦ to determine how much grass is on the wicket and things like that,â€ Smith told reporters in Brisbane at the pre-match media conference on Wednesday. â€œJackson will probably play, he played the last game and played pretty well so I dare say he will play.â€

The Gabba wicket, which traditionally offers pace and bounce, had a layer of grass on the eve of the venueâ€™s first day-night test. Cloudy conditions are also forecast at the end of the week which could make the pink ball swing as both sides hope to eke out an early advantage in the three-test series. Curator Kevin Mitchell suggested the match might not last the full five days if the weather was humid.

â€œItâ€™s not beyond the realms of possibility,â€ he told reporters. Lyon took four wickets to help a re-jigged Australia side beat the Proteas in the day-night match in Adelaide, a return to form for the off-spinner after he struggled in defeats at Perth and Hobart as South Africa claimed a 2-1 series win.

Pakistanâ€™s batsmen took Lyon apart in a 2-0 series loss for Australia in the United Arab Emirates two years ago but the spinner has an excellent record in Brisbane and has not missed a test there since his debut in 2011.

â€œSo Iâ€™ll leave you guys to write that, that thereâ€™s going to be four quicks and stuff,â€ Lyon said earlier in the week. â€œIâ€™m confident of playing, Iâ€™ll put it that way.â€

Australia have not lost a test at the Gabba since 1988 when they were beaten by Viv Richardsâ€™ West Indies.