Umpire sent to hospital after blow to head in Mumbai Test 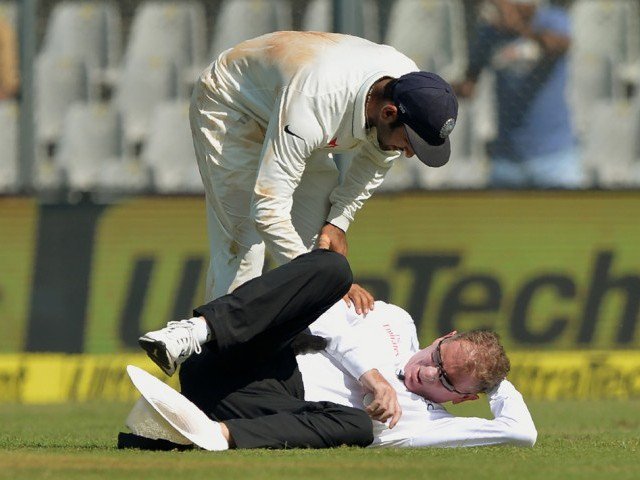 Umpire sent to hospital after blow to head in Mumbai Test

Umpire Paul Reiffel was taken off the field and sent to hospital after a throw hit him on the back of his head during the first day of the third Test between India and England in Mumbai.

The 50-year-old had collapsed from the blow and play was stopped for a few minutes. Third umpire Marais Erasmus took Reiffelâ€™s place as the on-field umpire.
England bid to keep India series alive

England batsman Keaton Jennings had played a stroke towards square-leg as fielder Bhuvneshwar Kumar lobbed a throw back in for Cheteshwar Pujara, who stood between Reiffel and the stumps.

Reiffel fell quickly to the ground after the hit and fellow umpire Bruce Oxenford rushed towards him to provide aid.

After basic tests by the England physio, Reiffel walked away from the field before being transported to a nearby hospital for further tests.

This article originally appeared on ESPNCricinfo

after blow to, head in, Mumbai Test, sent to hospital, Umpire