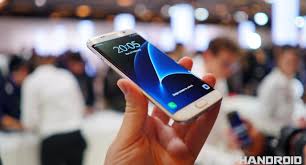 Samsungâ€™s new smartphone, the S8, which set to be released next year, may feature an edge-to-edge display, and no physical home button, a report from Bloomberg has suggested.

The bezel-less display is expected to provide a bigger viewing screen while maintaining the same overall size for the new phone. The physical home button may be given up in favour of a virtual home button place at the lower section of the screen.

Here are 7 worth waiting â€˜featuresâ€™ of Samsung Galaxy S8

Much is on the line for Samsung as the smartphone giant works to recover from the Note 7 debacle. The ill-fated smartphone was recalled after reports of the device catching fire and exploding costing the company $6 billion.

Meanwhile, the report added, Samsung may introduce OLED screens in its new smartphone, which are a lot thinner than liquid-crystal screens. This new screen technology may offer better colours at lower power consumption.

Samsungâ€™s new device is expected to arrive in March next year, though it can be delayed till April as the tech giant adopts tougher testing procedure for its phones.

Samsung is not the first smartphone maker to venture into bezel-less display territory with Xiaomi and Sony also putting up their concepts, though none have made it to mass production.

Have something to add. Please share in the comments below.