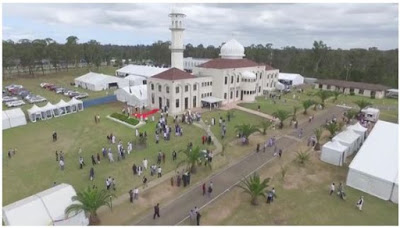 Along with the Australians from different walks of life, the convention attracts government officials, diplomats and various media outlets.

The three-day event will attract about 3000 community members and their guests from across Australia and abroad, providing a unique spiritual experience through scholarly lectures, discussions and special exhibitions. Â Along with the Australians from different walks of life, the convention attracts government officials, diplomats and various media outlets.

â€œOur historic Annual Convention is in its 32nd consecutive year and thousands of Ahmadi Muslims will be gathering to gain spirituality, understanding, peace and unity. Itâ€™s a unique Islamic event through which we hope to answer the various questions and controversies often associated with Islam. Our doors and our hearts are always open for our fellow countrymen and we wholeheartedly invite all those who seek knowledge and understanding of Islam and Ahmadiyyat.â€

Ahmadiyya Muslim Community is a dynamic, reformist and fast-growing international revival movement within Islam. Founded in 1889, the Community spans more than 200 countries with membership exceeding tens of millions. The Ahmadiyya Community has now built over 17,000 mosques, over 500 schools and over 30 hospitals, and has translated the Holy Quran into over 70 languages. The Ahmadiyya Muslim Community has been at the forefront of worldwide disaster relief through an independent charitable organization, Humanity First.