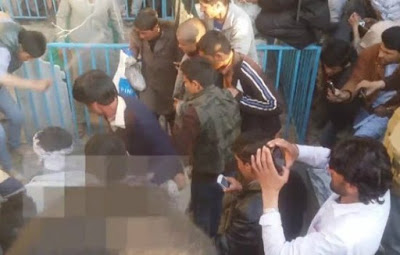 A video showing Christian boy being brutally tortured by a mob reveals horrifying scenes of religious intolerance in the country. Media reports detailed that the boy was beaten for drinking water from a mosque.

The video emerged few days back, which sowed a Christian boy brutally beaten up for purportedly drinking water from a fountain located inside a mosque. The boy was being physically assaulted by a mob in the public. Nevertheless, the video has also sparked controversy as doubts and questions surround the authenticity of the video. However the Christian boy was certainly beaten and physically tortured by a mob.

The United States Commission for International Religious Freedom stated in its annual report 2015: â€œPakistan represents one of the worst situations in the world for religious freedom for countries not currently designated by the U.S. government as â€˜countries of particular concern.â€™ In the past year, the government grappled with a challenging security environment and initiated efforts to fight the Pakistani Taliban.

However, despite these efforts, Pakistan continued to experience chronic sectarian violence targeting Shiâ€™a Muslims, Christians, Ahmadi Muslims, and Hindus. Despite positive rulings by the Supreme Court, the government failed to provide adequate protection to targeted groups or to prosecute perpetrators and those calling for violence. Pakistanâ€™s repressive blasphemy laws and anti-Ahmadi laws continue to violate religious freedoms and to foster a climate of impunity. USCIRF again recommends in 2015 that Pakistan be designated a â€˜country of particular concern,â€™ or CPC, under the International Religious Freedom Act (IRFA), as it has recommended since 2002.â€
Read original post here: Pakistan: Christian lad beaten for drinking water from a mosque

Christian, for drinking water, from a, lad beaten, mosque, Pakistan