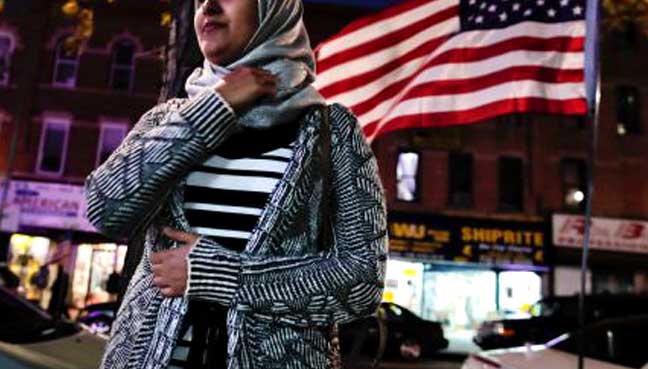 A uniformed city transit employee was taken to hospital with injuries to her knee and ankle after being pushed down the stairs at Grand Central, the bustling rail hub in the heart of Manhattan, en route to work Monday.

On Monday, another man was held on a $50,000 bail on a hate crime charge after an off-duty Muslim police officer was harassed in Brooklyn while out with her 16-year-old son Saturday evening, prosecutors said.

Cuomo said a subway train was also found vandalized with swastika graffiti on Saturday and that Ku Klux Klan fliers and business cards were distributed at two stations on the Long Island Rail Road last week.

The Democratic governor, an ally of Trumpâ€™s opponent Hillary Clinton, said hate crimes would be prosecuted to the fullest extent possible.

â€œThe work of the Hate Crimes Task Force has never been more urgent and we will continue to crack down on this type of criminal behavior,â€ Cuomo said.

The hijab-wearing police officer and her son were subject to â€œugly acts of hate, including threats of violence, simply because they are Muslim,â€ said acting Brooklyn district attorney Eric Gonzalez.

â€œThose who commit hate crimes will be held accountable for their reprehensible and offensive actions,â€ he added. New York is Americaâ€™s largest city and one of its most diverse with more than three million of its 8.55 million population foreign-born.

Nearly 900 incidents of hate and intolerance were recorded across the country in the first 10 days after Trumpâ€™s election, many by assailants apparently emboldened by his victory, an advocacy group reported last week.

Trumpâ€™s shock November 8 defeat of Clinton, who was bidding to become Americaâ€™s first female president, was cheered by white supremacists and others fired up by his rhetoric disparaging immigrants, Muslims and women.