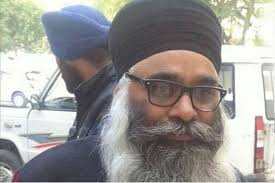 A top Sikh militant commander was recaptured by police in the Indian capital Delhi on Monday, a day after he was freed in a dramatic jailbreak by a gang wearing police uniforms.

Harminder Singh Mintoo, who heads a Sikh separatist group, was arrested on the outskirts of Delhi some 200 kilometres (124 miles) from the high-security prison in Punjab where he had been remanded on terror charges.

â€œHe was caught near Delhi early Monday and will be brought to Punjab,â€ A S Chahal, a senior local police official, told AFP.

Four other inmates who also escaped during the breakout â€” members of a local criminal gang jailed for murder â€” are still at large, Chahal added.

Mintoo, leader of the Khalistan Liberation Force (KLF) â€” a militant group fighting for a Sikh homeland in Punjab â€” was arrested in 2014 and was in jail awaiting trial for terrorism offences.

He was freed in an early morning raid on Sunday by at least 10 armed men wearing police uniforms. They stabbed one guard and opened fire before fleeing with the prisoners in cars. Three policemen were injured in the assault, which prompted a massive hunt for the fugitives. A woman was killed on a highway a few miles from the prison when police opened fire on her car after the driver allegedly failed to stop at a checkpoint.

Police later said she had no connection with the escapees. A 2.5 million rupee ($36,000) reward was offered for information on Mintooâ€™s whereabouts. It was not clear if the bounty had played any part in his recapture Monday. Three top prison officers were sacked or suspended following the jailbreak.

Sundayâ€™s raid was the second major prison break in India in less than a month. In October eight militants escaped from a jail in central Madhya Pradesh state. They were gunned down hours later in a shootout.

The Sikh separatist insurgency in Punjab largely waned in the late 90s, but several groups remain committed to the Khalistan movement and dozens of alleged Sikh militants are in prison.