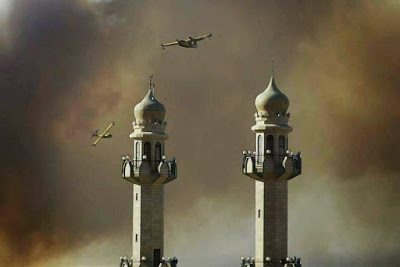 Two days after a wave of wildfires spread throughout the mixed Arab-Jewish city of Haifa and forced tens of thousands to flee, residents returned to pick through the blackened debris of their homes while pondering what had started it all.
…
Now, as Haifa residents take stock of the damage, many express concern that the fires and the accusations of politically motivated arson also might tear at the threads of Jewish-Arab coexistence in the city.
…
In the Haifa Arab neighborhood of Kbabir, located just few minutesâ€™ drive from the fires and home to a community of Ahmadiyya Muslims, Sheikh Muhammad Sharif Odeh opened up the local auditorium center to host 150 soldiers from Israelâ€™s Home Front Command while the fires raged.

The blazes were the most widespread in recent memory. In 2010, some 42 people were killed in a blaze in the Carmel Forest outside of Haifa, but the wildfires were limited to one area.