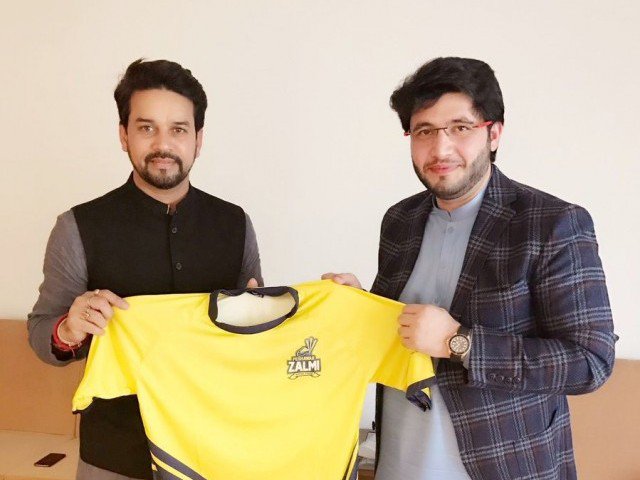 Owner of Peshawar Zalmi, one of the five Pakistan Super League (PSL) teams, Javed Afridi, met Board of Control for Cricket in India (BCCI) President Anurag Thakur on Friday and asked him to allow Indian Premier League (IPL) teams to play against PSL outfits on a neutral venue.

â€œWe had a discussion over Pakistan and India cricket relations,â€ said Javed after the meeting. â€œWe also talked about IPL and PSL teams. He was happy to meet me, and said we should play Pakistan on a third [neutral] venue.â€
He added: â€œThe point that I stressed upon was to allow IPL teams to play against PSL outfits on a neutral venue. I met a couple of team owners of IPL here and they are quite keen to have matches with us; the meeting was very successful. The second round of the meeting will be in Sri Lanka on December 17.â€

However, earlier in September, Thakur did not reply so calmly to the option of playing Pakistan. The BCCI chief ruled out resumption of bilateral cricket ties in wake of militant attack in Kashmir.

â€œNo question of playing cricket,â€ said Thakur. â€œToday, priority is to expose Pakistan as a country which sponsors terrorism. We canâ€™t even think of such thing (playing cricket with Pakistan).â€

The BCCI chief added Pakistan should be pressured all over the world to an extent that they find themselves alone.

Also, Thakur had asked the International Cricket Council to keep Pakistan and India in separate groups in the 2017 Champions Trophy in England.