Perspective: Some of Pakistan’s finest military minds have been Ahmadi. Clerics need to stop abusing them | Kashif Chaudhry 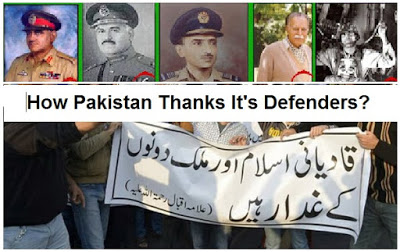 Perspective: Some of Pakistan’s finest military minds have been Ahmadi. Clerics need to stop abusing them | Kashif Chaudhry

When Donald Trump belittled a Muslim American Gold Star family, he received strong backlash from the civil society. The Democratic Party and the media came out in full support of Khizr and Ghazala Khan, whose son captain Humayun Khan had been killed in combat while serving in Iraq. The Gold Star parents were also provided a forum to speak at the Democratic National Convention. And earlier when Mr. Trump questioned Muslim loyalty to the United States, Muslim marine Tayyab Rashid responded with a fitting answer, and received overwhelming support from fellow non-Muslim Americans.

Like us Muslims in America, members of the Ahmadiyya sect (who are forcibly denied the Muslim identity) in Pakistan are also a misunderstood minority faith group. Their patriotism is also questioned by the right wing – and to a far greater extent. They are depicted as “traitors” of Islam and Pakistan, often Â by mainstream Sunni and Shia clerics. Unfortunately, unlike the United States, their is no political party or segment of mainstream media that comes to their rescue. Their marginalization and “otherness” has been normalized over the last four decades.

Take this recent case for an example.

Four names were recently proposed to fill the position of Pakistan’s new Chief of Army Staff. One of them allegedly has a distant relative that is Ahmadi. And this is keeping the right-wing mullahs up all night! They have started lobbying the state to drop his name and disqualify him immediately from the race. Numerous ads have been published in national papers, and warnings issued to the government. “… He will lead the country to doom. These people (Ahmadis) are the worst enemies of the country,” said Professor Sajid Mir, head of Jamiat Ahl-e-Hadith, Pakistan.

(…External link omitted due to language)

Just think about this for a moment. The General is being attacked not for any one of his own failings, but for merely having a relative who belongs to the Ahmadiyya community. I cannot even imagine the extent of prejudice, intolerance and hate these clerics have for the Ahmadis.

And so here is the question I have for my fellow Pakistanis. Will we allow Mr. Sajid Mir and other clerics who share his hateful mindset to continue to malign a patriotic Pakistani community? Will we forget that some of our greatest military heroes belong to the Ahmadiyya community? We must all unite at this juncture and stand with our Ahmadi brethren.

We owe this to Major General Iftikhar Janjua Shaheed, the only Pakistani general to have laid his life for Pakistan during military combat. He was an Ahmadi.

We owe this to Air Marshal Zafar Ahmad Chaudhry, the first Chief of Air Staff of Pakistan and a leading general in the Pakistan Air Force. He was Ahmadi too.

We owe this to Lieutenant General Abdul Ali Malik, who won us the largest tank battle after World War II in Chawinda during the 1965 Indo-Pak war. He was an Ahmadi too.

We owe this to Lieutenant General Akhtar Hussain Malik, a leading commander in the Pakistani Army who made great advances and was on the verge of a big victory when he was suddenly replaced with General Yahya Khan. Zulfikar Ali Bhutto is reported to have said: “Had General Akhtar Malik not been stopped in the Chamb-Jaurian Sector, the Indian forces in Kashmir would have suffered serious reverses, but Ayub Khan wanted to make his favorite, General Yahya Khan, a hero.” General Akhtar Hussain Malik was also an Ahmadi.

We owe this to Major General Abdullah Saeed, another Ahmadi who served as Commandant of the Pakistan Military Academy at Kakul and Chief Martial Law Administrator for Baluchistan.

We owe this to Â Pakistan Air Force’s Squadron leader Munir Ahmad who showed immense determination in the face of heavy odds and beyond the call of duty, flew eight combat missions before finally embracing martyrdom. Munir was Ahmadi too.

So here is what we must ask the Sajid Mirs of Pakistan. Do you consider these Ahmadis listed above our national heroes, or will you continue to paint them as traitors of our nation? Shame on you for trying to malign and denigrate the finest of our Armed Forces. Shame on you for insulting our Ahmadi Gold Star families and trying to hurt their pride. Shame on you for continuing to tear apart the nation on sectarian lines.

This line is perfectly apt for the plight of the Ahmadis and the hatred they receive.

Did non-Muslim Americans become Muslim by standing up for Khizr and Ghazala Khan? No, they only became decent humans. Why can’t we? The Ahmadis have been berated by extremist clerics for far too long. It is time us Pakistanis reject anti-Ahmadi bigotry and stand up for our Pakistani Ahmadi countrymen. Enough is enough!

Read original post here:Â Some of Pakistan’s finest military minds have been Ahmadi. Clerics need to stop abusing them