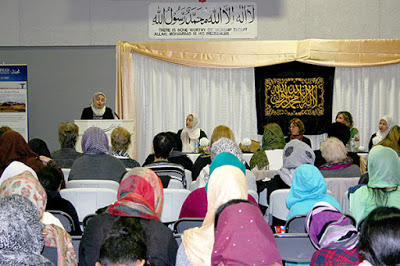 About 200 women from different faiths gathered at Deltaâ€™s Baitur Rahman Mosque on Sunday afternoon to learn about women in Islam.

The event on Nov. 20 was hosted by the Ahmadiyya Muslim Jamaâ€™at British Columbia Womenâ€™s Association to celebrate its 50th year in Canada and consisted of a panel presentation and lunch. Event organizer Aisha Naveed said the event aimed to demonstrate how Ahmadiyya women have integrated into Canadian society while upholding their beliefs and values.

â€œWe were trying to remove a lot of the misconceptions that people have, that we donâ€™t integrate enough, that we hide away and weâ€™re timid and shy â€“ because weâ€™re not,â€ she said.

Ahmadiyya Muslim Jamaâ€™at, a revival movement within Islam, has led several national campaigns in Canada aimed at fostering understanding. Last yearâ€™s Je Suis Hijabi campaign invited women from all faiths to try on a hijab and learn more about its significance and 2015â€™s Meet a Muslim Family connected families to help them learn more about one another.

â€œISIS and all these extreme groups are not the true representation of what Islam is,â€ Naveed said.

Panel presenters included Susan Shamash of the Or Shalom Synagogue in Vancouver and Tonya Engen of The Church of Jesus Christ of Latter-day Saints. Engen stressed that interfaith events create deeper appreciation for one another.

â€œIt helps us strengthen our own faith when we understand other people,â€ she said. â€œRight now, more than ever, we need to be friends with one another to help uphold each otherâ€™s beliefs.â€

â€œI could understand [people of other faiths] on a different level,â€ she said.

Malik said the mosque hosts programs coordinated by men and women together, but some, like Sundayâ€™s event, focus only on just the male or female sphere.

â€œThe most important thing you can learn is at the end of the day religion is not something that is to be imposed on others,â€ she said. â€œThe Qurâ€™an explicitly says so: for you, is your religion, and for me, is my religion. I think the trouble begins when you try to impose your values on other people.â€

Malik said women are often teachers within their own families.

â€œMy kids learn from me. They automatically inherit my fears and my values. If we can teach these women, or tell them who we are, [and] they can overcome their biases, it means we are not just teaching the women; weâ€™re teaching the whole family.â€

North Delta residents Diane Parsons and Rita Hagman from North Delta attended after a mosque representative extended an invite at a Sunday service at their church, Trinity Lutheran on River Road.

â€œThe focus today was spent on talking about women and their religion, and I was very heartened by what I heard,â€ Hagman said.

Parsons said getting out and meeting people from other faiths helps facilitate understanding. â€œI think anytime we make a relationship with someone or between groups itâ€™s going to decrease fear.â€