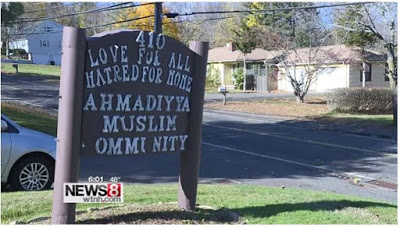 â€œWe want to say, donâ€™t be afraid to come here. Friends are coming to the mosque Friday to talk about Thanksgiving and about what they appreciate, what they are grateful for.â€

In our rapidly accelerating culture, taking a moment to reflect peacefully sometimes seems impossible. Thankfully, the grateful Thanksgiving tradition continues to offer space to reflect on our shared national values, regardless of class, creed, race, gender or orientation.

â€œLove for all, hate for none,â€ is the message shared by Middletown resident Miyan Zahir Muhammad Mannan, director of Outreach for the Baitul Aman, the Meriden-based â€œHouse of Peaceâ€ mosque. Established in the 1980s by Zahirâ€™s father, Miyan Manzur-ul-Mannan, the Connecticut chapter of the Ahmadiyya Muslim community preaches a â€œjihad of peace, of love, of understanding,â€ said Muhammad Mannan.

â€œBoth the Holy Quran and the U.S. Constitution teach sanctity of each and every life irrespective,â€ added Muhammad Mannan, who follows teachings of an Islamic sect founded in 1889 by Mirza Ghulam Ahmad, considered the messiah by his followers. Ahmad set in motion a nonviolent â€œjihad of the pen,â€ Muhammad Mannan said.

The belief that Ahmad is the messiah is considered heresy by other Muslim sects who persecute believers, Muhammad Mannan said.

After the shooting last year by mosque neighbor Ted Hakey Jr., who drunkenly fired shots into the unoccupied Meriden mosque on the night of the deadly November 2015 terrorist attacks in Paris, a positive series of events put the mosque in a stronger, more visible, positive place in community than ever before, Muhammad Mannon said.

As the first-year anniversary of the mosque shooting passes, members reflect on this â€œblessing in disguiseâ€ that managed to change the hearts and minds of many, including the shooter, who quickly apologized, Muhammand Mannon said.

The tragic event amplified a message of love rather than fear or hate, and a narrative that proves love triumphs over hate, he said.

â€œWe know we can impact our neighbors with true love,â€ said Talhaht Mannan.

â€œWith all the people rising up in support, it showed us we have strong community,â€ said Muhammad Mannon, who has since become a relied-upon media source representing views of Muslim Americans. â€œIt gave us a chance to tell who we are and it did wake us up to the idea that maybe we need to reach out to our neighbors and let them know who we really are.â€

When President Abraham Lincoln proclaimed a national Thanksgiving Day to be held each November, the year was 1863 when Americans were engaged in a Civil War. Today, our countryâ€™s differences continue to divide us, with a political electorate offering polarized response to calls to build a fence where others prefer a bridge, to threats of deporting millions of undocumented immigrants or the suggestion of creating a registry that singles out Muslim Americans.

â€œWe hold these truths to be self-evident, that all men are created equal, that they are endowed by their Creator with certain unalienable Rights, that among these are Life, Liberty and the pursuit of Happiness,â€ according to the text of the U.S. Constitution and its amendments.

â€œProphet Muhammad said 1,300 years ago that love and loyalty to your country are a part of faith,â€ said Muhammad Mannan, who seeks to understand others better too. The mosque regularly reaches out to support the vulnerable and marginalized members of the community, offering regular food and blood drives, providing a monthly breakfast to the homeless shelter, and more.

Each Friday at 8 p.m., the community is invited for â€œCoffee, Cake & True Islamâ€ a discussion held at the Meriden mosque, located at 410 Main St. New themes and topics will be discussed.

â€œWe want to say, donâ€™t be afraid to come here,â€ said Muhammad Mannon. â€œFriends are coming to the mosque Friday to talk about Thanksgiving and about what they appreciate, what they are grateful for.â€

The talk is intended to bring together local citizens to break down cultural barriers and create understanding and respect.

Thanksgiving is â€œa wonderful holiday that gives families the opportunity to be together,â€ said Talhaht Mannan, Muhammad Mannonâ€™s mother, the preschool director at Central Connecticut State University. Talhaht Mannan also is a past president of the mosqueâ€™s womenâ€™s auxiliary and a board member. â€œIn America, we are thankful that we can practice our religion.â€

â€œCoffee, cake & True Islamâ€ on Fridays offers a space for the public to meet a â€œpeace loving Muslim,â€ said Muhammad Mannon, with a smile and a twinkle in his eye. â€œWe all are human and we all deserve love.â€