Is Ahmadi General going to be New Army chief ? 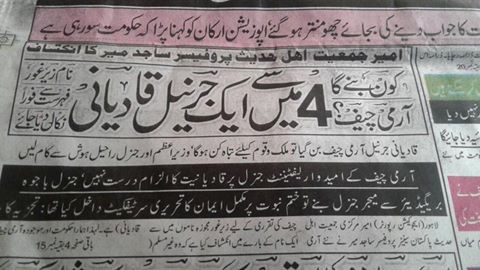 Is Ahmadi General going to be New Army chief ?

Four names have been proposed for the new Chief of Army Staff in Pakistan. Mullahs are lobbying the State to drop one of these names because he happens to have an Ahmadi Muslim relative. Others are implying he himself is Ahmadi when he is not. “… He will lead the country to doom. These people are worst enemies of the country.”

Just think about that. Even having an Ahmadi relative is intolerable to these extremist Sunni Mullahs. They deliberately mislead people to incite more hate against the Ahmadis. And people forget that the only general to have laid his life for Pakistan on battleground was an Ahmadi Muslim (General Iftikhar Janjua). Leading heroes of the 1965 war were also Ahmadi Muslims (General Akhtar Malik, General Abdul Ali Malik). This was before Pakistan gave up Jinnah’s vision (1974) and before Ahmadi Muslims were banned from the highest posts in the military.

Pakistanis must reject this hatred and bigotry. These statements implying Ahmadi Muslims are traitors not only places a direct target on the backs of Ahmadis in Pakistan but is an insult to the sacrifices of Ahmadi Muslim Gold Star families.