I will only fight for Pakistan, says MMA star Ahmed Mujtaba 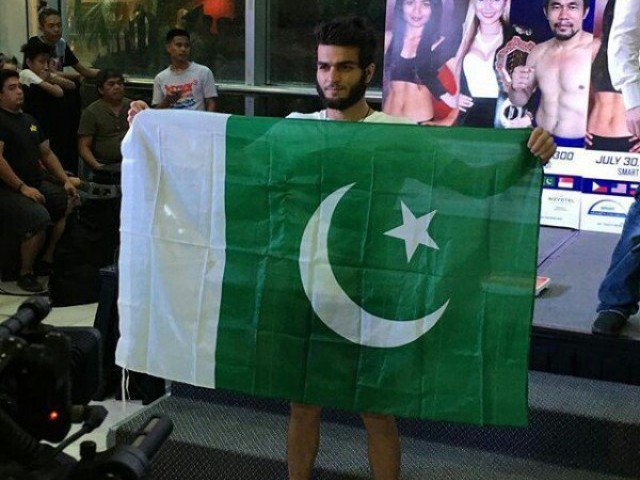 I will only fight for Pakistan, says MMA star Ahmed Mujtaba

KARACHI: Pakistanâ€™s undefeated Mixed Martial Arts (MMA) star Ahmed Mujtaba clarified yesterday that he is fully committed to representing Pakistan at international level despite a lack of recognition from the government and scarcity of corporate sponsors.

Mujtaba, who was at Karachiâ€™s Third Generation Mixed Martial Arts Centre (3GMMA) to conduct a workshop, was egged by a certain section of the media to issue a threat of switching allegiance.

However, the Quetta-born stood firm and made it clear that he has no plans whatsoever of representing any other country than his beloved Pakistan.

â€œWhen you donâ€™t get the recognition you deserve itâ€™s only natural to seek alternatives, but thatâ€™s not me. I wish to represent Pakistan in every battle I fight,â€ said Mujtaba.

He then revealed that the life of an MMA fighter is doubly difficult in Pakistan as he not just has to undergo intensive training sessions but is also required to change the prevalent mindset.

â€œThere are many hurdles for me as many people say MMA has no future but I keep a positive mindset and work to change the image of Pakistan through MMA,â€ he said.

Mujtaba, who recently won his debut fight at Asiaâ€™s largest MMA promotion ONE FC, also gave a few tips to female grapplers who were at 3GMMA to train and told them to stick to their coachesâ€™ advice.

â€œPakistani coaches have all the required skills and techniques that you need,â€ he said. â€œAll a fighter needs is to train with dedication and consult their coaches.â€