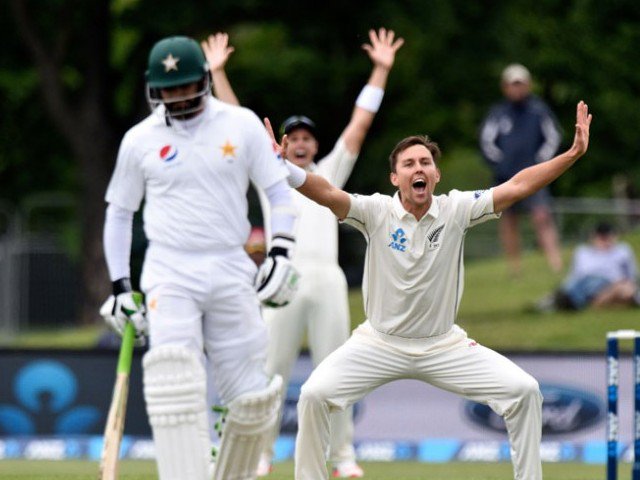 KARACHI: Pakistan entered the two-match Test series against New Zealand as favourites but following a hapless display by the visitors in the first Test, where the hosts won by eight wickets, that tag has been reversed; now Pakistan are the underdogs.

New Zealand, meanwhile, have a chance of a rare series win against Pakistan as even a draw in Hamilton tomorrow will serve the purpose.

But with momentum on their side, the Kane Williamson-led team will look to make up for the 3-0 whitewash they suffered at the hands of India last month.

Pakistan, meanwhile, have experienced a sharp dip in form since their 2-1 win over the West Indies in the UAE and their performance in Christchurch, where they collapsed for 133 and 171 runs in the first and second innings respectively, is cause for alarm.

Add to that the fact that Pakistan would be without talismanic captain Misbahul Haq, who decided to travel back to Pakistan following the death of his father-in-law, the second Test is expected to be much tougher than the first.

But Azhar Ali, the stand-in captain for the Hamilton Test, is â€˜confidentâ€™ the team will put on a better show. â€œAs a batting unit we need to put up a better show â€¦ We have to improve in the next game and Iâ€™m confident we will do that,â€ said Azhar in Hamilton yesterday.

Former chief selector Iqbal Qasim is of the view that Pakistan need to adopt a different, more aggressive strategy for the Hamilton Test.

Many cricket pundits had blamed Pakistanâ€™s first-Test capitulation on their extremely defensive approach and Qasim believes that the visitors need to take the game to the hosts if they are to get a result in their favour.

â€œPakistan will have to be aggressive in batting. Just staying on the crease and not scoring runs will not serve any purpose. Pakistan batsmen should try to dominate the bowlers and score runs with a better pace. The Hamilton wicket is another challenging track for the batsmen and staying for long there is very difficult so Pakistan would need to score fast,â€ he said.

Qasim, meanwhile, called for the inclusion of fast-bowler Wahab Riaz for the final Test. â€œWahab is very fast and he could be a game changer in Hamilton. The management should show some confidence in him.â€

He further added that spinner Yasir Shah, who after impressing heavily against the West Indies in the UAE but was a mere spectator in the first Test in Christchurch, should only be included in the squad if the pitch conditions suit his style.

â€œThe inclusion of Yasir Shah in playing XI should be made after looking at pitch conditions,â€ he said.

The former Test cricketer also said that Pakistan have the potential to bounce back in the series. â€œPakistan went to Christchurch without much preparation but now the players have a better idea of the conditions. They are in a much better position to win the match and level the series,â€ he said.