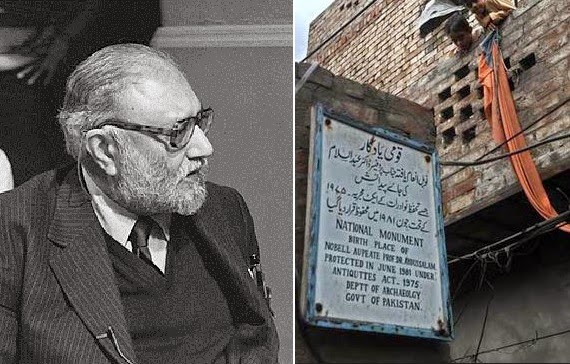 The Jamaat-e-Ahmadiyya spokesperson believes the great physicist has been discriminated against only because of his religious beliefs. Dr Salam belonged to the minority Ahmadiyya community.

LAHORE: The 20th death anniversary of Pakistanâ€™s first Nobel prize winner Dr Abdus Salam passed away without any significant mentions on Monday. The only event in his memory is scheduled at his alma mater, the Government College University (GCU) Lahore, and that too two days later.

The great scientist passed away on November 21, 1996 in Oxford, United Kingdom but not a single ceremony has ever been organised to commemorate his death or praise his contributions in the field of science.

Though the federal government set up the Dr Abdus Salam Chair at GCU in 1999, the staffers have been awaiting permanent appointments since. They are usually hired on one- or two-year contracts.

Dr G Murtaza was nominated as the Salam Professor for the chair in 2000. Apart from the assistant professor, two research officers, two post doctoral fellows, one assistant and an attendant are working with the chair.

Dr Murtaza told The Express Tribune that the department had actually planned a three-day Abdus Salam symposium for November 21, 22 and 23 but it had to be put off because of the holiday announced in Lahore owing to Imam Hussainâ€™s Chehlum.

Besides the GCU, no other event has been planned for the scientistâ€™s death anniversary. Punjab University spokesperson confirmed the varsity had never organised any conference on Dr Abdus Salam.

The Jamaat-e-Ahmadiyya spokesperson believes the great physicist has been discriminated against only because of his religious beliefs. Dr Salam belonged to the minority Ahmadiyya community.

Spokesperson Saleemudin told The Express Tribune that being an Ahmadi, Dr Salam faced this discrimination in his life that continued afterwards as well. â€œHe was a hero for Pakistan. But I have never seen his portraits along with other national heroes put up on national days,â€ he added.

Dr Salamâ€™s 400-square-foot house comprising two rooms in Mohalla Dawood Nahar in Jhang Tehsil was declared a national monument in 1981. This is the house where the physicist was born in 1926.

â€œThere have never been any commemorative ceremonies for Dr Salam at this house as long as I have lived here,â€ one of the neighbours Nadeem says. A signboard outside the house states the property is protected under the Antiquities Act, 1975.

Nadeem said the outer wall of the house fell some time ago and was repaired by neighbours before the archaeology department took the property into its custody and deputed a caretaker for the site.

The keys to the house remain with another neighbour Yasir, who opens the house for occasional visitors. Reportedly, the caretaker visits once or twice a month. The house needs repairs but the archaeology department and government seem to have no such intentions.

In 1950, the Cambridge University awarded him for the most outstanding pre-doctoral contribution to physics. He obtained a PhD in theoretical physics and his thesis, published in 1951, contained fundamental work in quantum electrodynamics which had already gained him an international reputation.

Dr Salam returned to Pakistan from England in 1951 to teach mathematics at Government College, Lahore. In 1952, he was appointed head of the mathematics department of Punjab University. He left Pakistan for Europe in protest against state-sanctioned discrimination and in 1979 he was awarded the Nobel Prize for his groundbreaking research in theoretical physics.

When Dr Salam travelled to Pakistan in December 1979, he was received in Lahore, Peshawar and Islamabad by the military secretaries to the governors and then president Ziaul Haq. When protesters from a politico-religious party threatened to disrupt a commemorative event at Islamabadâ€™s Quaid-e-Azam University, the institution was compelled to shift the event to the National Assembly Hall.

Dr Salam passed away in 1996 and was buried in Rabwah without a state funeral. The epitaph at his grave reads â€˜First Nobel Laureateâ€™ as the word â€˜Muslimâ€™ has been deleted on court orders.