Sikh man mistaken as Muslim abused, harassed at US store 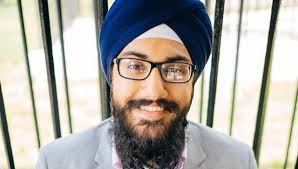 Sikh man mistaken as Muslim abused, harassed at US store

A Sikh student at Harvard Law School was allegedly abused and harassment at a store near his campus after he was mistaken for being Muslim.

Harmann Singh, 22, a first year law student said he was shopping at a store in Massachusetts and talking to his mother over the phone when a man walked inside and told the counter clerk, â€œOh look, thereâ€™s a (expletive) Muslim.â€

â€œOver the weekend, I was confronted by a man who called me a â€˜(expletive) Muslimâ€™ and followed me around a store aggressively asking where I was from, and no one in the store said a thing,â€ said a dismayed Singh.

â€œI was on the phone with my mom the entire time, and we were both concerned for my safety as this man stood inches away from me,â€ Singh recalled his experience.

Singh, who is from Buffalo, New York, said he tried toÂ ignore the man and continued to talk toÂ his worried mother. The man then chased Singh to the checkout counter.

â€œI told him, â€˜Hey Iâ€™m actually from New York. I live here now down the street. Is there anything I can do to help you?’â€ Singh explained. However, the harasser did not respond, forcingÂ him to leave the store.

Meanwhile, the owner of the store told Boston.com that he was going back and forth inside the shop when the incident occurred on November 11 and saw the man speaking to Singh.

â€œI donâ€™t know where that guy came from and I hope I donâ€™t see him again,â€ the ownerÂ said on the condition of anonymity.

Since theÂ election of Donald Trump there has been a steep rise in incidents against Muslims. The Republican candidate has been highly outspoken against Muslims, minorities and immigrants, raising concerns and fear among the said groups and ethnicities.

More than 200 incidents of hate, harassment and intimidation have been witnessed across the US ever since Trump emerged victorious in the presidential elections on November 8.

The article originallyÂ appeared on The Times of India

abused, as Muslim, at US store, harassed, mistaken, Sikh man