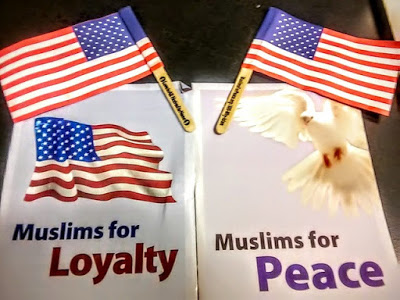 “I chose to react in peace and harmony by publicly showing that we as Muslim-Americans are steadfastly loyal to and love our country.”

On Nov. 8, Donald J. Trump was named the president-elect of the United States of America. As a young Muslim-American, I originally felt a feeling of total disbelief over these results because of the implications to the many minority groups residing in our country. I was surprised after speaking to my parents at their calm resolve and lack of worry about the future of our nation. They told me that this was what America had democratically chosen and it was our duty, as Muslims, to accept the result. â€œThis,â€ they said, â€œthis is where our faith really matters.â€

So I chose to respond with peace and patience as we await Trumpâ€™s presidency and policies to follow. On Veterans Day, only a few days later, I organized a group of Muslim-Americans from the Ahmadiyya Muslim Community to build a float and march in the San Jose Veterans Day parade. We did this to publicly demonstrate our loyalty to this country and our appreciation for those who have fought to defend it.

There is a lot of palpable tension and unrest in America right now. One reason is because minority groups are facing more discrimination and hate crimes as a result of Donald Trumpâ€™s harsh and hurtful rhetoric. Another comes from the divide in our country between Trump-supporters and Trump-opposers. One group is hurting because of feelings of alienation and discrimination within their own country, while another group has been hurting for the past eight years as they have watched the middle class shrink and economic issues grow.

Instead of reacting in protest, which is seemingly an appealing option for many of those who want to publicly dissent, I chose to react in peace and harmony by publicly showing that we as Muslim-Americans are steadfastly loyal to and love our country.

We have always taken pride in our faith and have never given into the fear of Islamophobia.

Marching down the streets of San Jose, the celebration of all the veterans that served was accompanied by a feeling of inclusiveness and welcoming support. A number of people came up to us, thanking us for coming out and even apologizing for all the recent treatment of Muslims and close-minded behavior. People in the crowd shouted words of encouragement which lifted everyoneâ€™s spirits even more. Itâ€™s strange to say that I felt almost surprised by all of this support because Muslims are often perceived in a negative light, but the immense kindness contributed not only to a successful parade but also a sense of belonging amongst my fellow Muslims. In a week that felt very categorized by divisions, this parade helped create unity with our fellow citizens.

Following the law of the land is a part of our faith; we fully support the Constitution and abide by the results of all democratic elections. As a member of the Ahmadiyya Muslim Community, the oldest Muslim community in the United States, I live by our peaceful motto: Love for All, Hatred for None. As of now, we are willingly awaiting the outcome of the policies presented by Donald Trump, and only if these policies discriminate against minorities will we peacefully speak out in opposition. We all need to come together and have empathy for those who are hurting on both sides of the political spectrum. We have to build bridges, not burn them. So Iâ€™m calling on my fellow Americans to be the ones to remain peaceful and hopeful as we patiently await a more forbearing future.