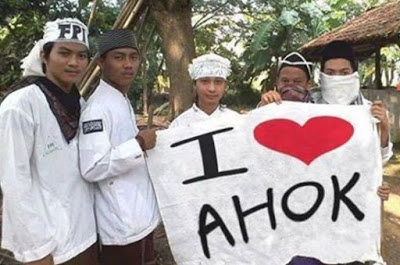 Although the November 4 rally began peacefully, violence erupted after dusk, leading to police using tear gas. One person died of an asthma attack and several others were injured.

Around 3000 protesters have rallied in the Indonesian capital calling for unity and tolerance.

Around 3000 protesters have rallied in the Indonesian capital calling for unity and tolerance, amid rising ethnic and religious tensions sparked by allegations of blasphemy against the city’s Christian governor.

Earlier in the week, police named Jakarta governor Basuki Tjahaja Purnama, commonly known as Ahok, as a suspect in a blasphemy case over accusations that he insulted Muslims in remarks about the Koran.

The police’s move came after more than 100,000 Muslims rallied earlier in November demanding Purnama, a member of the ethnic Chinese minority, be arrested for blasphemy.

Participants in Saturday’s rally, far smaller than the November 4 anti-Purnama protest, were dressed in red and white, the colours of the country’s flag.

Although the November 4 rally began peacefully, violence erupted after dusk, leading to police using tear gas. One person died of an asthma attack and several others were injured.

The blasphemy allegations stemmed from remarks made by Purnama during a meeting with Jakarta residents in September.

Purnama said his opponents in next year’s gubernatorial election had used a verse from the Koran to deceive voters and prevent him from winning another term.

Many Muslims in Indonesia interpret the text in question as prohibiting them from electing non-Muslims as their leaders, although many fellow Muslims disagree that Purnama’s remarks amounted to blasphemy.

Backed by Joko’s Indonesian Democratic Party of Struggle, he is seeking another term in the election scheduled for February 15. The General Election Commission has said Purnama’s status would not affect his candidacy.