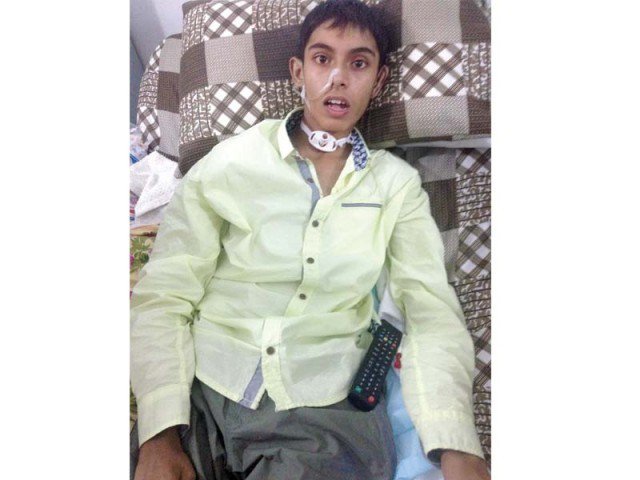 Ahmed, who is feeling weak due to nastrogastric tube feeding, lies in a bed with a side-table full of medicines and medical reports at a relativeâ€™s place in the Gizri neighbourhood of Karachi.

Rashid, himself a primary schoolteacher in Dargah Mashoori Sharif village of Larkana, showed his sonâ€™s academic achievements to prove he was a brilliant student.

â€œMy son has made no recovery in more than three months â€¦ the torture my son has been subjected to is visible to everyone,â€ said Rashid. â€œSince the day of the incident, my son had been on ventilator for 18 days and underwent dialysis 14 times.â€

Provincial Education Secretary Fazlullah Pechuho ordered the formation of a medical board to investigate the torture claim. â€œCorporal punishment by schoolteachers will not be tolerated,â€ he said, adding that the cadet college was an autonomous body.

Rashid recalled that he had dropped his son off at the college after summer vacations ended on August 6 and visited him the next day. On August 10, he received a call from House Master GM Bhatti, who said his son was having seizures and the administration was planning to rush him to hospital in Larkana.

â€œI rushed to the college and intercepted the college vehicle before it reached Larkana city,â€ Rashid recalled crying hysterically with tears rolling down his cheeks.

â€œMy son, wearing school uniform, lay unconscious and bore torture marks on his right foot, back and neck. His eyes and tongue had popped out and his lips and tongue were bloodied,â€ he said.

Rashid said a doctor at the hospital referred his son to Karachi. â€œNow questions are being raised on the mental health of my son â€¦ If this was true, how did he manage to get admission in the cadet college?â€

The distressed father said Ahmed excelled in his studies in Class VII at the same institution and won various quiz and spelling competitions. â€œHe was a brilliant and hardworking student.â€

He said the school administration should come clean and answer who had made his sonâ€™s life miserable. â€œI have already spent all my savings on my motherâ€™s treatment who is a cancer patient â€¦ I appeal to people who had helped Malala Yousafzai to help my son,â€ Rashid said.

Rashid called for the sacking of the college principal, Lt-Col (retd) Iftikhar Hussain Baloch. â€œUntil this is done, justice will not be served,â€ he said.

The school administration was tight-lipped on the issue. When approached, House Master GM Bhatti refused to comment and instead referred The Express Tribune to the principal. The principal, however, could not be reached despite repeated attempts.

Taking notice of the incident, Sindh Chief Minister Murad Ali Shah ordered the provinceâ€™s health minister to bear all medical expenses for Ahmed and send him to the US for treatment, if need be. He added that strict action would be taken against any teacher found guilty of hurting Ahmed.