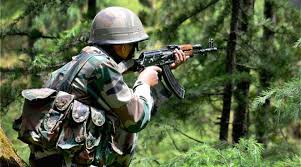 The two-vehicle convoy was on its way to the oil refinery town of Digboi in Tinsukia district when it came under attack from the rebels, a senior police officer told AFP.

â€œThe area is extremely dense and dark because of thick foliage. The army jawans (soldiers) in the vehicle came under heavy gunfire,â€ Mukesh Agrawal said. â€œThree soldiers have died and four others are injured.â€

There was no immediate claim of responsibility, but police suspected the ambush was likely carried out by rebels belonging to a splinter group of the separatist outfit ULFA (United Liberation Front of Asom).

The ULFA is one of the several groups fighting for independent homelands for their tribal followers in the tea and oil-rich region of Assam.

In 2011, the ULFA announced it would join peace talks with the Indian government in a move to end a 33-year-old rebellion. A faction of the National Democratic Front of Bodoland (NDFB) militant group also agreed to a ceasefire with New Delhi.

Since then, elements of both groups which oppose the peace overtures have carried out bomb and grenade attacks in the state, according to police officials.

In August six gunmen from the NDFB opened fire on a busy market, killing 15 people and wounding several others. More than 10,000 people, mostly civilians, have lost their lives to the insurgency in Assam during the past two decades.