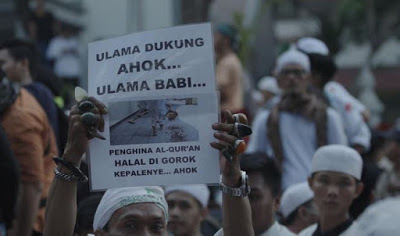 Ahokâ€™s purported crime was to question the political motivations behind an edict by Islamic conservatives that the Koran forbids Muslims voting for non-Muslims.

As Jakartaâ€™s Christian, ethnic Chinese governor fights for his political future and freedom, one thought must weigh heavily on his mind â€” no accused in almost half a century has won a blasphemy case in Indonesia.

Since named a police suspect on blasphemy charges this week, Basuki â€œAhokâ€ Tjahaja Purnama has spent his days reassuring Â­supporters he will not capitulate and end his re-election bid.

His opponents â€” a coalition of conservative Islamic groups and opposition leaders fielding their own candidates in Februaryâ€™s gubernatorial polls â€” are just as adamant Ahok must be jailed Â­before the Â­elections.

Whether he wins or loses, this battle could prove a watershed moment for this moderate Â­Muslim-majority nation.

Indonesia has long been viewed by Western allies as a model of religious pluralism and stable democracy in the region, but mobilisation this month of more than 100,000 moderates and conservatives marching side-by-side to demand the once unassailably popular Ahok be punished for insulting Islam has raised questions about the direction of the country.

Ahokâ€™s purported crime was to question the political motivations behind an edict by Islamic conservatives that the Koran forbids Muslims voting for non-Muslims.

Human Rights Watch campaigner Andreas Harsono fears the countryâ€™s blasphemy laws have proved such an effective political tool that they will be used more frequently. â€œI think by next February Ahok will be detained. I donâ€™t think even the political Â­forces that support Ahok can turn this around. I hope I am wrong.â€

For Harsono, and thousands of others expected to march through Jakarta today in defence of pluralism, the crisis is a battle for the soul of the largely tolerant capital amid fears of a â€œPakistanÂ­isation of Â­Indonesiaâ€.

There are parallels with a case in Pakistan six years ago that led to the assassination of liberal Punjab governor Salman Taseer.

Progressive Pakistanis were shocked when Taseerâ€™s killer â€” his bodyguard â€” was showered with rose petals by lawyers and supporters as he entered court. Many protested it did not reflect Pakistani society, a moderate Sufi Islamic culture far from the austere creed of Arab Wahabism. His killer claimed he acted out of religious duty because Taseer was seeking a pardon for a Christian woman sentenced to death for blasphemy, and to amend laws frequently used to oppress minorities and settle personal scores.

As in Indonesia today, moderate and extremist Muslim Pakistanis, who might have clashed on every other issue from honour killings to the Taliban, found themselves united. Â­Taseerâ€™s murder had a chilling effect on public debate and many look back on that moment as a marker for Â­middle-class Pakistanâ€™s switch to a more conserÂ­vative Islam.

â€œBlasphemy laws go straight to the fundamentals of faith â€¦ Itâ€™s the one issue on which hardline groups can mobilise mainstream opinion so effectively because they raise the stakes so high,â€ says Omar Wairach, a former Islamabad-based journalist and spokesman for Amnesty International.

Indonesia had its chance to Â­repeal its blasphemy laws â€” a Â­legacy of the dying days of the Sukarno era. The late, liberal Muslim scholar and former president Abdurrahman Wahid led an unsuccessful 2009 petition of the Constitutional Court, arguing the laws violated the enshrined right to religious freedom. His daughter Yenny says he was motivated by the escalation of blasphemy charges under successor Susilo Bambang Yudhoyono.

Many believe President Joko Widodo, whose PDI-P backs Ahokâ€™s re-election bid, was referring to SBY when he blamed Â­â€œpolitical actorsâ€ for the violence at the November 4 rally. SBYâ€™s eldest son, Agus Harimurti Yudhoyono, is one of Ahokâ€™s rivals.

Yenny Wahid suspects Indonesians would be less likely to support the lawsâ€™ repeal today than even a decade ago. â€œI have met rational, highly educated individuals who say Ahok crossed a line,â€ she says.

Even she drew breath when she heard Ahokâ€™s speech, though she rejects the concept of Â­blasphemy. â€œWe have been working so hard to promote tolerance and pluralism but the sentiment at the moment is so raw over this issue. For me, the real challenge now is how to peel the moderates away from the radicals?â€

Analysts believe charging Ahok with blasphemy was intended to do just that; Â­separate moderates content to let the law take its course from the radicals and powerbrokers who will not relent until they have their biggest scalp. In such an environment, it is far from clear Ahok can defeat the charge, but his failure would â€œset an ugly precedentâ€ for Indonesia, Wairach says. â€œPeople should look to Pakistan and see the dangers of these laws.â€