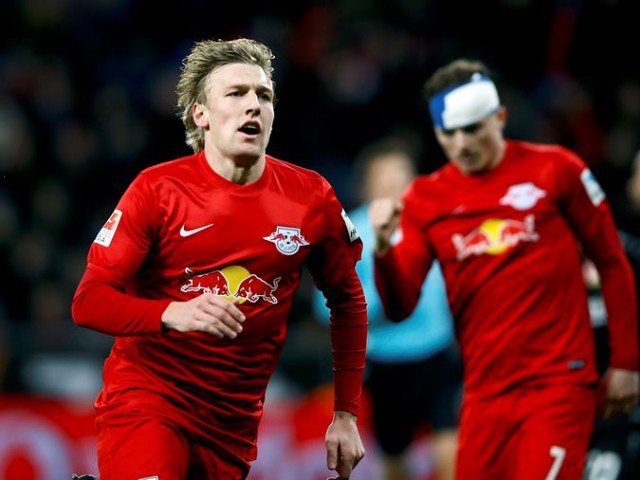 BERLIN: RB Leipzig claimed another milestone in their fledgling history on Friday by taking three points in a stunning 3-2 comeback win at Bayer Leverkusen to knock Bayern Munich off the top of the German league table.

The Bundesliga new boys, now unbeaten after 11 games, have a three-point lead on Bayern Munich, who are at Borussia Dortmund on Saturday evening in the battle of Germanyâ€™s top clubs â€” dubbed â€œDer Klassikerâ€.

â€œFrom a psychological point of view we really did very well in the second-half when we were behind twice,â€ said Leipzig coach Ralph Hasenhuettl.

The turning point came when Brandt earned a penalty on 54 minutes only for Hakan Calhanogluâ€™s shot to be cleared by Leipzig goalkeeper Peter Gulacsi.

Swedish international Emil Forsberg equalised for Leipzig following an impressive solo run on 67 minutes and defender Willi Orban headed in the winner on 81 minutes for the Bundesliga upstarts.

Leipzig earned their place in Germanyâ€™s top flight with four promotions in seven years and have now set a Bundesliga record run for a newly promoted club by going 11 games unbeaten.

The club, sponsored by Austrian energy drink giants Red Bull, have 27 points from 11 games with champions Bayern Munich on 24 points.

But the newcomers have come under fire from rival fans who believe the clubâ€™s sponsors have undermined the German idea of football not being an advertising product.

On Friday night the team bus was sprayed with paint on its way to the BayArena stadium.

Borussia Dortmund boss Hans-Joachim Watzke even weighed into the debate during the week.

â€œFor the first time, we have a case where nothing, but absolutely nothing, has developed in an historic fashion. We play football to promote a canned drink!â€ said Watzke.