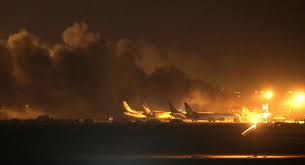 KARACHI: A medical team, under the supervision of a judicial officer, will exhume the bodies of 10 attackers of Karachi airport attack case on Nov 22 for identification.

The four-member medical team will collect samples for DNA tests to establish the identity of the killed assailants.

A judicial magistrate (Malir) had directed the health authorities to constitute a medical board since police moved court for the exhumation of the bodies for DNA testing.

Around 10 heavily armed militants stormed Karachi airport in June 2014 and were killed by army commandos and personnel of other security forces during an operation lasting about five hours. They were buried at an Edhi-run cemetery after their identity remained unknown.

A police surgeon in a compliance report placed before the judicial magistrate on Friday said that the medical board headed by Prof Farhat Hussain Mirza, chairman of the forensic medicine department of the Jinnah Sindh Medical University, had been constituted.

The medical board will exhume the bodies to obtain samples for DNA testing in the presence of a judicial magistrate on Nov 22 at the Edhi graveyard located in the Mochko police station limits, the report added.

Around 25 people, including personnel of the Airport Security Force, police and Rangers, were killed in the audacious gun-and-explosive attack. Three men are facing trial before an anti-terrorism court for allegedly providing logistic support, funds and weapons to the attackers.

The CTD claimed to have arrested Ishaq, alias Bobby, and Mohammad Asim, alias Ahmed alias Capri, belonging to the banned Lashkar-i-Jhangvi, recently for their alleged involvement in many targeted killing cases, including the murder of renowned Qawwal Amjad Sabri and personnel of the army and police.

A CTD official also said that Bobbyâ€™s brother-in-law Ehtesham and his friend Majid, with eight other militants, were killed by law enforcement personnel during the deadly airport attack.

Meanwhile, the administrative judge of the anti-terrorism courts remanded on Friday both the suspected militants in police custody in three more cases, including the murder of seven policemen guarding polio workers.

Police produced Ishaq Bobby and Asim Capri, who have already been in police custody in explosive and illicit weapon cases, before the court to seek their remand in more cases pertaining to the killing of seven policemen in Orangi Town in April this year, murder of two traffic policemen near Ayesha Manzil in May and a triple murder in Zaman Town last year.

The administrative judge handed them over to police on physical remand till Nov 22.

MPA gets bail in â€˜anti-stateâ€™ CDs case
An anti-terrorism court granted on Friday bail to a provincial lawmaker of the Muttahida Qaumi Movement in a case related to alleged distribution of CDs of â€˜anti-stateâ€™ speeches.

MPA Shiraz Waheed was arrested in August for allegedly circulating CDs, which contained speeches and statements to wage war or attempt or abet to wage war against the country, among the people in Ahsanabad.

The MPA through his lawyer moved the bail application. After hearing arguments from both sides, the ATC-II judge granted bail to him against a surety bond of Rs1 million.

The case was registered under Sections 120-B (criminal conspiracy), 121 (waging or attempting to wage war or abetting waging of war against Pakistan), 123-A (condemnation of the creation of the state and advocacy of abolition of its sovereignty), 124-A (sedition) and 109 (abetment) of the Pakistan Penal Code read with Section 7 of the Anti-Terrorism Act, 1997 at the SITE Superhighway Industrial Area police station. Around 15 suspects are shown absconders in the case.

MQM-London activists get bail
A judicial magistrate granted on Friday bail to seven activists of the Muttahida Qaumi Movement-London in a case registered for rioting.

Police arrested the suspects on Nov 16 near Jinnah Ground in Azizabad when they tried to engage in a scuffle with leaders and workers of the MQM-Pakistan when the latter attempted to visit Yadgar-i-Shuhada. They were sent to prison the following day.

The court granted them bail against a surety bond of Rs10,000 each.

10 Karachi, airport, attackers, Bodies of, for DNA tests, to be exhumed