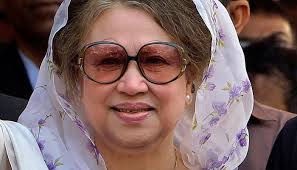 A Bangladesh court on Thursday issued an arrest warrant for the country’s opposition leader after she failed to appear for a hearing over the date of her birthday.

The bizarre controversy, which has been raging for more than a decade, centres on the fact that Khaleda Zia celebrates her birthday on August 15, the day Bangladesh’s former leader Sheikh Mujibur Rahman was assassinated.

He was the father of current Prime Minister Sheikh Hasina, Zia’s bitter political rival, whose supporters allege that the opposition leader uses a fake birth date.

Many Bangladeshis have no record of their birth dates and millions use fake dates to make them eligible for government jobs with age restrictions.

Magistrate Mazharul Islam delivered the arrest order in a Dhaka court after a pro-government journalist filed a case accusing the two-time prime minister of lying about her birth date.

â€œThe court issued the arrest warrant after she failed to appear in the court over her fake birthday case,â€ the plaintiff’s lawyer Dulal Mitra told AFP.

Police have now until March 2 to arrest Zia, who has faced two previous warrants in different cases. She is likely to avoid that fate however by surrendering to the court and seeking bail.

Zia’s lawyer Sanaullah Mia confirmed the arrest order, and told AFP he would consult her on how to proceed.

Rahman, who was brutally assassinated along with most members of his family in a military coup, is regarded as a hero of Bangladeshi independence and August 15 is a day of mourning.

The coup leaders appointed Zia’s husband the head of the army and he eventually took power in November that year, leading to 15 years of military rule.

Plaintiff Gazi Jahirul Islam, who is a senior journalist at a local television station, said he had copies of Zia’s personal documents to prove his case.

â€œHer August 15 birthday is fake. We’ve got copies of her school certificate, her machine readable passport and her marriage document. She had different birthdays in those documents,â€ Islam told AFP.

â€œShe has been celebrating August 15 as her birthday since 1996 in order to insult supporters of a rival political party who observe the date as the national mourning day.â€

The 71-year-old leader of the opposition Bangladesh Nationalist Party (BNP) did not publicly celebrate her birthday this year following criticism even by some of her staunchest supporters.

â€œI don’t know how a birthday can affect someone or how it can defame him or anyone else,â€ said her lawyer Mia.