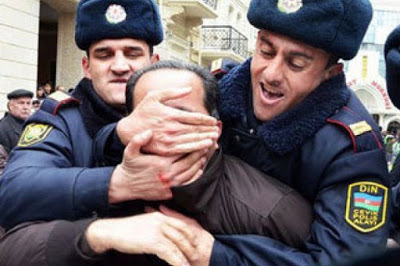 Not one State Committee official in Baku or in branches around the country, police officer or court would discuss these raids, literature seizures or punishments with Forum 18.

At least 26 shops and 6 homes raided for religious literature sold or distributed without having undergone compulsory censorship by or in places not licensed by State Committee for Work with Religious Organisations. Some individuals already punished. UN Human Rights Committee concerned over religious censorship.

Police and officials of the State Committee for Work with Religious Organisations have raided at least 26 shops and six homes in October and early November across Azerbaijan to seize religious literature being distributed without the compulsory state permission. Some book sellers have already been punished. All the literature seized from shops appears to have been Muslim.

Not one State Committee official in Baku or in branches around the country, police officer or court would discuss these raids, literature seizures or punishments with Forum 18.

The “Expertise” Department at the State Committee in Baku â€“ which implements the state censorship â€“ told Forum 18 on 16 November its head Nahid Mammadov was out of the office and no-one else could speak for the department. Asked about the many raids, the man simply said that everything done was “in the law”. The man who answered the phone of State Committee official Aliheydar Zulfuqarov â€“ who participated in raids on shops in the southern town of Masalli (see below) â€“ put the phone down when Forum 18 introduced itself. The State Committee press office told Forum 18 its head, Yaqut Aliyeva, was away until 18 November and no-one else could speak to the press.

Local officials of the State Committee where shops and homes were raided â€“ in Lankaran, Masalli, Baku and Quba (which covers Khachmaz) â€“ refused to answer any of Forum 18’s questions.

Religious literature and other materials can be sold or distributed only at specialised outlets which have been approved both by the State Committee and the local administration.

In addition, all religious literature produced in, published in (including on the internet) or imported into Azerbaijan is subject to prior compulsory censorship. When the State Committee does give permission to publish or import a work it also specifies how many copies can be produced or imported. All religious materials sold must have a sticker noting that they have State Committee approval. State officials have repeatedly denied that this represents censorship.