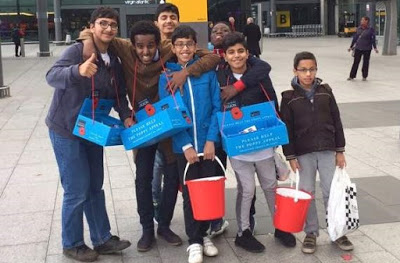 This is the ninth year that AMYA members have partnered with the Royal British Legion and to date have raised more than Â£200,000 for them through the Poppy Appeal with more than 600 volunteers nationally this year.

YOUNG Muslims from Farnham and Haslemere are raising thousands of pounds collecting for the Poppy Appeal at various locations including Wembley Stadium, London Underground stations, Heathrow airport and locally.

More than 100 youngsters from the Ahmadiyya Muslim Youth Association (AMYA) have been out in force with collection boxes for the Poppy Appeal.

They launched their campaign on Friday, November 4, at The London Mosque in Southfield (Londonâ€™s first mosque), the Baitul Futuh Mosque in Morden (UKâ€™s largest mosque), in Epsom and in Yorkshire.

They were joined by MPs, members of the armed forces and The Royal British Legion. The Caliph and worldwide leader of the Ahmadiyya Muslim Community, His Holiness, Mirza Masroor Ahmad said: â€œMuslims are obliged to be loyal to the country in which they live.

This is the ninth year that AMYA members have partnered with the Royal British Legion and to date have raised more than Â£200,000 for them through the Poppy Appeal with more than 600 volunteers nationally this year.

Since October hundreds of young Muslims belonging to the AMYA have been collecting in high streets, rail and tube stations, stadiums and airports around the UK. During 2014 the youth were also actively involved in the Tower of London Poppy installation.

This is part of long-running nationwide initiatives by the AMYA to contribute to the country in different ways.

â€œThe Legion are extremely pleased with the enthusiasm and commitment from all of the volunteers.

â€œWe enjoy working with AMYA as they are dedicated and passionate about their charity work, and the Poppy Appeal would not be the same without their help.â€

The AMYA is the UKâ€™s largest organised Muslim youth organisation and the leading Muslim youth group challenging extremism in the UK.