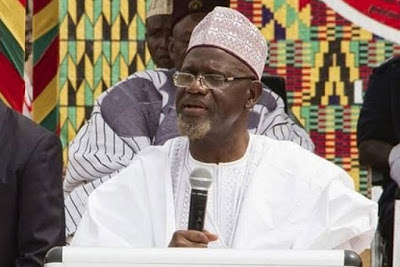 Maulvi Bin Salih was speaking at a forum in Accra, which sought to educate Ghanaians, particularly the Muslim Community, on their responsibility for maintaining peace before, during and after the elections.

The Ameer and leader Â of the Ghana Â Ahmadiyya Mission, Maulvi Alhaji Mohammed Â Bin Salih, has urged the youth, particularly those in Muslim communities, to shun politicians who try to involve them in any violent act.

According to him, most of the youth were still naive about the consequences of violence, and were likely to be incited by politicians to instigate violence on December 7.

“As religious leaders, we need to continue drawing the attention of the youth to the need for peaceful elections because a peaceful Ghana will lay a better foundation for their future aspirationsâ€™,â€™ he said.

Maulvi Bin Salih was speaking at a forum in Accra, which sought to educate Ghanaians, particularly the Muslim Community, on their responsibility for maintaining peace before, during and after the elections.

Organised by the Islamic University College of Ghana (IUCG), the forum was on the theme, “Towards a Peaceful Election 2016: Role of the Muslim Community in Ghanaâ€.

The spiritual leader bemoaned how some youth allowed themselves to be used as agents for violence.

“If we destroy our country, the youth will suffer more because the elders will not be there to bear its consequences, hence do away with violence,â€™â€™ he advised.

Maulvi Bin Salih called on religious leaders to continue educating their followers, particularly the youth, on the need to preserve the peace to sustain national development.

He,therefore, advised Ghanaians to be wise in making their choice of who would lead the country on December 7.

For his part, the President of IUCG, Dr Mohsen Maarefi, appealed to stakeholders to ensure that the December election was free and fair so the peace in the country would not be compromised.

“Ghana is the beacon of democracy in Africa, and the citizens must be proud of that,â€™â€™ he noted.