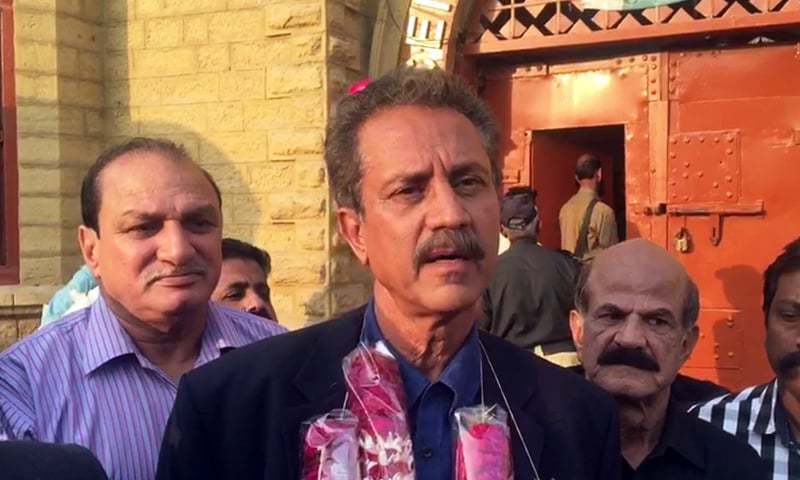 Jailed mayor of Karachi and Muttahida Qaumi Movement-Pakistan leader Waseem Akhtar was released from jail on Wednesday after being granted bail in the last of 39 cases against him.
An anti-terrorism court in Karachi granted bail to Waseem Akhtar and PPP’s Abdul Qadir Patel in a case pertaining to the facilitation and provision of medical treatment to alleged terrorists and gangsters at PPP leader Dr Asim Hussainâ€™s hospital.

The ATC judge granted Akhtar and Patel bail against a surety bond of Rs500,000 each on the grounds that the Sindh High Court had previously granted bail to others co-accused in the same case. The court will issue release orders after submission of the surety bonds.

Scuffle between party supporters
Expecting Akhtarâ€™s arrival at the Yadgar-i-Shuhada, supporters of MQM-London and MQM-Pakistan indulged in sloganeering, reported DawnNews.

Supporters of MQM-Pakistan, who had gathered to welcome the Karachi mayor at the venue, also appeared to be joining supporters of MQM-London in chanting slogans against Akhtar and others.
Police officials, in order to control and disperse the crowd, have tried to push back the party activists.

A small number of party supporters were also arrested by law-enforcement agencies. The number of MQM-London supporters at the venue has increased reportedly.

Due to the tense situation, all party supporters have been barred from entering the premises of Yadgar-i-Shuhada.

Akhtar has been behind bars since July 19, 2016 when an ATC dismissed his pre-arrest bail application in the same case.
He had been facing trial in 39 cases ranging from facilitation of terrorists and hate speech.

Around 30 of the 39 cases pending against him are related to listening and facilitating of the speeches of MQM’s founder Altaf Hussain. Some eight cases are in connection with violence in Karachi on May 12, 2007.

Other co-accused in the case Rauf Saddiqui, Anees Qaimkhani and Usman Moazzam had been granted bail by the Sindh High Court, whereas Saleem Shahzad has been declared an absconder in the case.