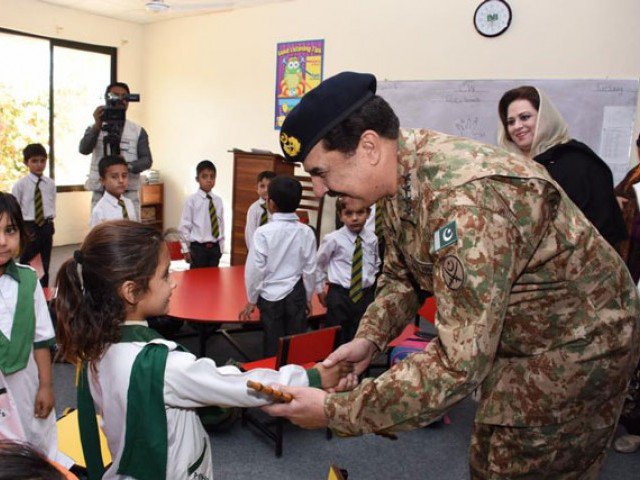 WAZIRISTAN:Â Chief of Army Staff (COAS) General Raheel Sharif has vowed to provide a secure and prosperous Pakistan to the future generations of the nation.

â€œWe will give a secure and prosperous Pakistan to our future generations,â€ the army chief remarked during a meeting with tribesmen of North and South Waziristan on Tuesday, according to the ISPR.

He assured the tribesmen of Pakistan Armyâ€™s determination to ensure â€œall promises for socio-economic development are delivered for prosperity of the regionâ€.

Addressing the jirga of tribal elders, the general said: â€œOperation Zarb-e-Azb has irreversibly eradicated terrorist networks from Fataâ€¦ We have made considerable gains in our operations and reached close to our objective of total elimination of terrorism from our soil.â€

According to the militaryâ€™s media wing, the army chief was briefed on the progress of stabilisation operations, return of temporary displaced persons (TDPs) and development works in FATA during his visit.

Expressing his satisfaction on the progress of the successful return of TDPs, the COAS lauded the efforts of â€œeveryone involved in ensuring their smooth and timely return with dignity and honourâ€.

The army chief directed the officials concerned to complete the return of remaining TDPs within stipulated time before close of the current year.

Earlier, General Raheel visited the newly opened Army Public School in Chagmalai, South Waziristan and spent some time with the children. Speaking at the occasion, he commended the faculty and the students for exhibiting such excellent standards of education in these areas.

The army chief inaugurated the state-of-the-art Younus Khan Sports Stadium in the agency, as well as saw the inaugural match played between Fata Eleven and Younus Khan Eleven.