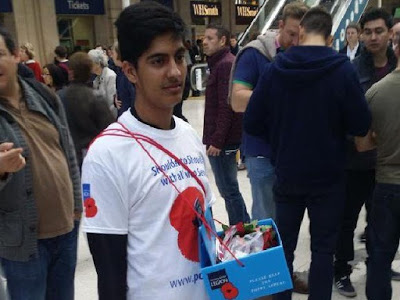 So far, they have raised over Â£200,000 for them through the Poppy Appeal, with over 600 volunteers taking part in national fundraising efforts this year.

Young Muslims from Surrey are raising thousands of pounds collecting for the Poppy Appeal.

Over 100 members of the Ahmadiyya Muslim Youth Association have been out with collection boxes at places like Wembley Stadium, London Underground stations and Heathrow Airport.

The Ahmadiyya Muslim Youth Association (AMYA) is the UKâ€™s largest organised Muslim youth organisation and say they aim to challenge extremism in the UK.

They launched their campaign on the 4th November at The London Mosque in Southfield (London’s first mosque), the Baitul Futuh Mosque in Morden (UK’s largest mosque), in Epsom, and in Yorkshire.

MPs, Members of the Armed Forces and The Royal British Legion also joined them there.

It is the ninth year that AMYA members have partnered with the Royal British Legion.

So far, they have raised over Â£200,000 for them through the Poppy Appeal, with over 600 volunteers taking part in national fundraising efforts this year.

This is part of a long-running series of initiatives up and down the country, which have also seen AMYA members take part in blood drives, carry out elderly home visits, feed the homeless, and be a part of charity events, green initiatives, peace conferences and interfaith meetings. During 2014 they were also actively involved in the poppy installation at the Tower of London

â€œAMYA have been crucial in raising funds for the Royal British Legionâ€™s Poppy Appeal for several years participating in mass collections all over the UK.

â€œThe Legion are extremely pleased with the enthusiasm and commitment from all of the volunteers.

â€œWe enjoy working with AMYA as they are dedicated and passionate about their charity work, and the Poppy Appeal would not be the same without their help.â€

â€œThe Holy Prophet of Islam, Muhammad (pbuh) said that to love one’s country is part of your faith. This is true Islam.

“As Muslims it is our responsibility to show loyalty to our country of residence and work for the betterment of our country. We therefore hope that our participation is a clear indication of our desire for peace and unity between all peoples, nations and religions.”