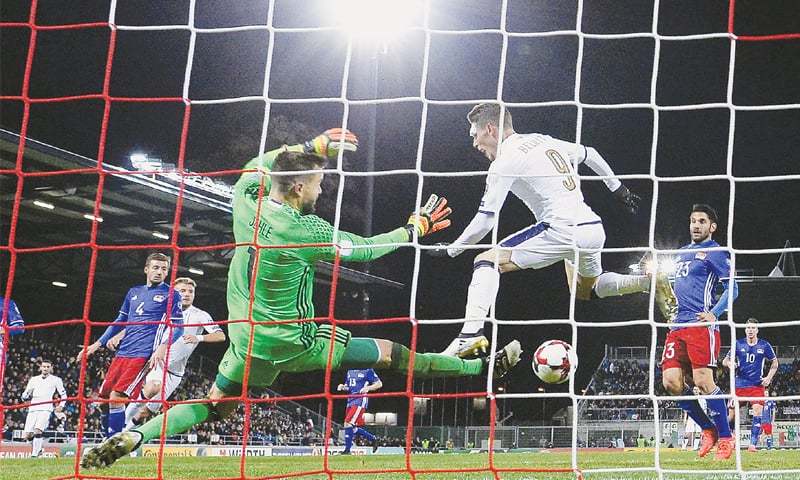 PARIS: Wales conceded an agonising late equaliser as Serbia battled to a 1-1 draw in a World Cup qualifier on Saturday as former champions Italy and Spain both won 4-0.

Earlier on Saturday, the Republic of Ireland has stunned Austria 1-0 in Vienna and are top of Group â€˜Dâ€™ on 10 points, with Serbia second on eight and Wales third on six.

Gareth Bale rocketed Wales into a 30th-minute lead in Cardiff after Hal Robson-Kanu dispossessed Matija Nastasic and fed the ball to the Real Madrid forward, who cracked home a powerful snap shot to make it 1-0.

But Aleksander Mitrovic was fastest to react with four red shirts around him when Antonio Rukavina whipped in an inviting cross to level for the visitors late in the game.

â€œIt was a disappointing result, we feel like we threw away two points. Weâ€™re at home, 1-0 up after 85 minutes, itâ€™s two points lost,â€ Bale admitted after the game.

Just moments before Serbia had levelled, Bale had seen a snapshot come agonisingly back off the post.

Wales coach Chris Coleman was less disappointed and was looking down the road.

â€œWe are four points behind Ireland but we play them twice,â€ he said. â€œWe have a massive chance. Tonight the boys deserved all three points.â€

It was the third game in a row the Welsh have gone ahead only to draw.

â€œWe can be proud of ourselves. We are on the right track. Today we can be happy with one point,â€ said Serbia captain Branislav Ivanovic.

The Irish top Group â€˜Dâ€™ thanks to a James McClean strike three minutes after half-time in Vienna.

â€œThis is going to be a very tight finish. But this has been a splendid start for us and we are delighted with the 10 points,â€ said Ireland boss Martin Oâ€™Neill.

Spain and Italy continue to set the pace at the helm in Group G and both have 10 points.

Spain played at Granada where Macedoniaâ€™s Darko Velkovski scored a 34th minute own goal before Votolo on 63 minutes, Nacho Monreal (83) and veteran striker Aritz Aduriz (85) gave them a comfortable win.

Taking on minnows Liechtenstein, Italyâ€™s Anfrea Belotti scored either side of strikes from Ciro Imobile and Antonio Candreva.

Eran Zahavi converted an 18th-minute penalty to set Israel on their way with Dan Einbinder and Eliran Atar making sure they beat Albania 3-0 in Tirana.

Iceland failed to replicate their Euro 2016 heroics in a 2-0 defeat in Croatia in Group â€˜Iâ€™.

Croatia grabbed the lead after 15 minutes through Inter Milan midfielder Marcelo Brozovic, but it was Iceland who took control after that in Zagreb, where the game was played out in front of empty stands after a FIFA stadium ban.

Despite having plenty of the ball in both halves, Iceland failed to make the crucial breakthrough.

And the home side punished them in injury time, Brozovic again doing the damage against the run of play.

Croatia, now top of the group with 10 points from four games, finished the match with 10 men after Ivan Perisic was sent off at the death.

Also in Group â€˜Iâ€™, Turkey revived their slim hopes of making it to Russia in 2018 with a 2-0 home victory over Kosovo in Antalya.

Burak Yilmaz and Volkan Sen scored within four minutes of one another in the second half to leave Kosovo bottom on just a solitary point.

Georgia and Moldova played out a 1-1 draw in Tbilisi to remain rooted in the bottom two spots in Group â€˜Dâ€™.