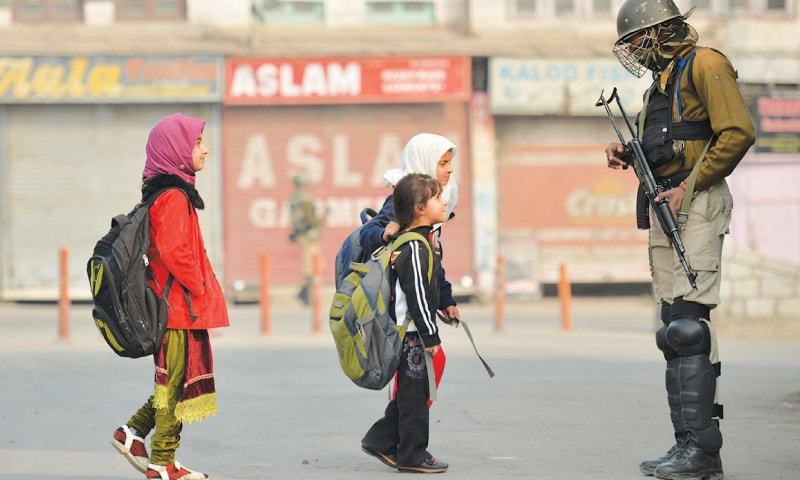 A call for a march to the grand mosque, located in Nowhatta area in downtown Srinagar, had been given by the resistance leaders, Syed Ali Geelani, Mirwaiz Umar Farooq and Yasin Malik, to mark the Youm-i-Istaqlal.

However, the authorities imposed curfew and other restrictions in Srinagar and other towns to stop people from marching to the mosque. They also sealed the mosque, disallowing people to offer Friday prayers there.

At least 10 youths suffered injuries at the hands of security personnel across the India-held Valley.

According to residents of Nowhatta, nobody was allowed to proceed to the historical mosque, which was built by Sultan Sikandar, the father of Zainul Aabideen (popularly known as Budshah), between 1389 and 1420.

Continuous siege of the mosque since July 8 has evoked widespread condemnation from various quarters.

The Mirwaiz, who was placed under house arrest on Thursday, tried to defy the curbs and march towards the mosque, where he used to deliver sermons, but was whisked away by police.

Talking to reporters outside his Nigeen residence before his detention, the Mirwaiz said the anti-Muslim regime had once again barred Muslims from offering Friday prayers at Jamia Masjid and other main mosques across held Kashmir.

â€œReligious rights are under assault in Kashmir and the subjugated people of Kashmir know that it is being done to inflict collective punishment upon them,â€ he said.

Quoting a police official, Srinagar-based Current News Service (CNS) said that curfew had been imposed in seven areas of the city to â€œmaintain law and orderâ€.

Police locked the Hyderpora residence of Syed Ali Geelani from outside when he tried to march towards the historical mosque.

The chief of Jammu Kashmir Liberation Front, Yasin Malik, had been shifted to the Central Jail, Srinagar, on Thursday evening after his arrest from his Maisuma residence in the city.

The CNS reported that despite the restrictions, people took to the streets in various parts of Srinagar, Badgam, Ganderbal, BaraÂ­mulla, Bandipora, Kupwara, Islamabad, Pulwama, Shopian, Kulgam and other areas and tried to carry out the planned march.