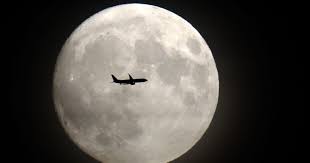 Pakistanis are in for a rare supermoon sighting on Monday Nov 14 at 6:52pm, where the moon will appear 14 per cent bigger and 30pc brighter than a normal full moon.

This will be the largest, brightest full moon in nearly seven decades, and promises Earth-bound sky-watchers a celestial spectacle. The next supermoon will be spotted in 2034.

The Pakistan Meteorological Department on Friday said that if skies are clear, the moon will be clearly visible, and explained the phenomena by saying that the orbit of the moon around the Earth is elliptical, not circular, which causes a change in distance between the two.

The supermoon was sighted yesterday In Australia, United States and Mexico.