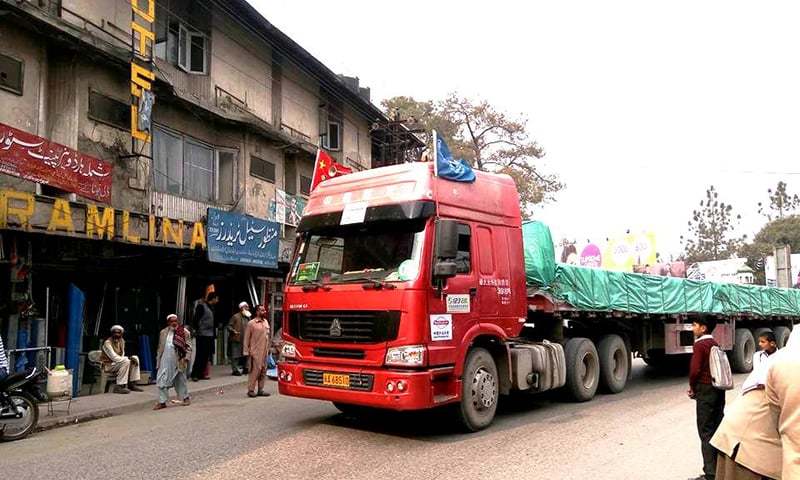 GWADAR: The first trade convoy carrying Chinese goods for export through the western route of the China-Pakistan Economic Corridor (CPEC) and a Chinese ship arrived at the port here on Friday.

Official sources confirmed the anchoring of the ship at the port and said another vessel was expected to arrive within 24 hours.

The second trade convoy was scheduled to reach here on Saturday (today).

The goods will be exported to countries in the Middle East and Africa.

A ceremony marking the opening of trade activities through the corridor will be held on Sunday, which will attended by Prime Minister Nawaz Sharif, Chief of the Army Staff General Raheel Sharif, Balochistan Governor Muhammad Khan Achakzai, Chief Minister Nawab Sanaullah Zehri and ambassadors of 15 countries.

Meanwhile, the Gwadar Yakjehti Council took out a procession in support of the CPEC.

Speaking at the Gwadar Press Club, the organisers of the procession termed the CPEC a game-changer for the region, especially Balochistan, as it would bring about progress and prosperity.

They said the elements opposing the CPEC were not well-wishers of the people of Gwadar.

â€œWe are happy that Gwadar is at the centre of the CPEC because this will remove poverty and create jobs for the local people,â€ one of the speakers said.

The speakers praised the role of the Pakistan Army and said the corridor could not have been completed without the support of the armed forces.

They added that the council would always try to protect the rights of people of Gwadar.