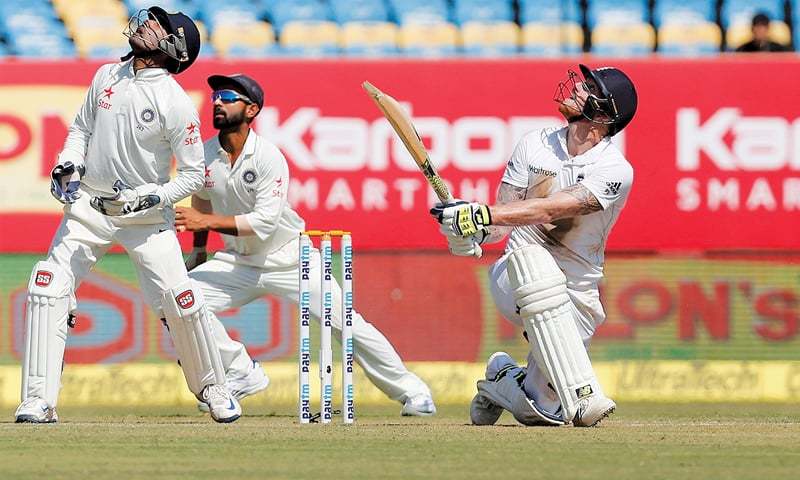 RAJKOT: All-rounder Ben Stokes lived a charmed life to register his fourth century as England punished a sloppy India to post a huge first innings total on the second day of the opening Test on Thursday.

An increasingly confident England capitalised on some slack fielding to amass 537, effectively batting India out of the first match of the five-Test series at the Saurashtra Cricket Association Stadium in Rajkot.

India openers Gautam Gambhir and Murali Vijay safely negotiated the 23 overs they faced to take their side to 63-0 at stumps, trailing England by 474.

Gambhir was unbeaten on 28 while Vijay was on 25.

Stokes survived two dropped catches, two run-out chances and a tough stumping opportunity before he was finally out for an eventful 128 just before the scheduled tea break.

The left-handed batsman, who also saw three mis-hits soar high into the air before falling between onrushing fielders, reached three figures with a boundary off spinner Ravindra Jadeja (3-86).

After Joe Root scored a hundred on Wednesday, Moeen Ali and Stokes matched the feat a day later to mark the first time in 55 years that an England side had three batsmen score centuries in the same innings at an Asian venue.

Geoff Pullar, Ken Barrington and Ted Dexter all scored hundreds in the second innings of a Test against India at Kanpur in December 1961.

Resuming on 311-4, England walked out in a positive frame of mind and dominated the Indian attack, who failed to help their cause by bowling too many loose deliveries.

Moeen had been on 99 overnight, but picked up the run he needed to bring up his milestone off the third ball of the day when he dabbed pace bowler Mohammed Shami for a quick single.

Moeen was dismissed for 117 after shouldering arms to an inswinging delivery from Shami, which ended a brisk 62-run stand with Stokes for the fifth wicket.

There was, however, no respite for the Indian bowlers as Stokes and Jonny Bairstow added another 99 for the sixth wicket before the latter was caught behind off Shami.

India had dropped three catches on the first morning of the match and their profligacy continued when wicket-keeper Wriddhiman Saha dropped Stokes twice off Yadav.

Stokes, who managed to banish memories of three ducks against India in his three previous innings in 2014, was on 60 when Saha spilled the ball after diving to his left. The tiny wicket-keeper then grassed another almost identical opportunity when the all-rounder had added another run.

Bairstow hit five fours and two sixes in his aggressive knock of 46 before Saha finally managed to hold on to a catch.

Stokes, who hit 13 fours and two sixes during his 235-ball knock, also added 52 for the ninth wicket with Zafar Ansari before Saha completed a smart catch down the leg side off Yadav to dismiss him.

Moeen later said patience was the key that enabled England post the highest score by a visiting team in nearly five years.

â€œPatience is something Saqi [spin coach Saqlain Mushtaq] talks about a lot, we knew we needed to be patient,â€ the all-rounder said. â€œItâ€™s a very good pitch. I knew if I bat 200 balls I will surely make a hundred… We didnâ€™t plod much against the spinners and tried to be attacking in our approach.

But Jadeja defended Ashwin, saying any bowler can have an off-day.

â€œItâ€™s part of the game. We were playing five bowlers. It is the responsibility of every bowler and not just Ashwin to take wickets,â€ said Jadeja. â€œSometimes half-chances get converted and on some days easy chances are dropped.â€

The last time three visiting batsmen scored centuries in the same innings in India was in 2008-09 when Sri Lanka toured the country.

NOTE: Yadav completed the 10th over after Shami bowled one ball before going off with cramps.