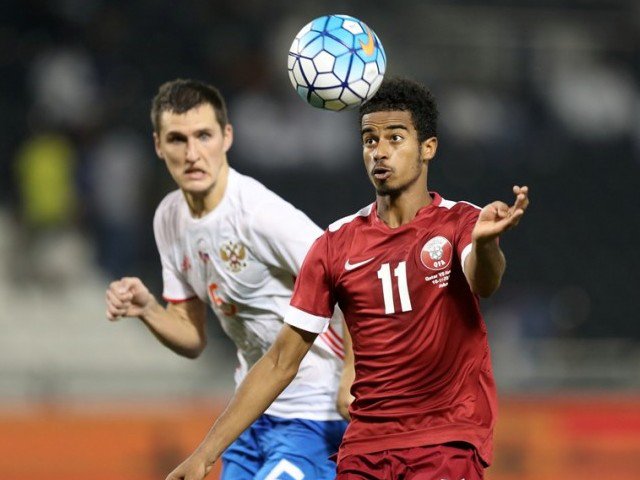 A smart 72nd minute header from Karim Boudiaf was enough to secure a morale-boosting 2-1 victory for Qatar ahead of next weekâ€™s crucial World Cup qualifier in China.

They also owed their win to a superb 85th minute penalty save from goalkeeper Saad Abdulla Alsheeb, who tipped away Alecander Korokinâ€™s forceful kick. It was Qatarâ€™s first ever victory against Russia in four attempts.

Boudiafâ€™s strike was the only goal of the second half, despite chances for both sides, after the teams had gone in level at one piece after 45 minutes. Both teams had scored from the penalty spot.

Alexander Samedov gave Russia a fourth minute lead, but that was wiped out by Boualem Khouki in the 34th minute.

Despite the low key nature of Thursdayâ€™s game, both teamâ€™s coaches are under pressure brought about by hosting a World Cup finals.

Stanislav Cherchesov was appointed as Russian coach in August after the countryâ€™s disastrous Euro 2016 campaign and set a target of ensuring his team reach the semi-finals in 2018.

Jorge Fossati has been given the oneruous task of getting Qatar to its first finals in Russia, ahead of hosting its own tournament in 2022.

On November 15, Qatar play China in Kunming in a match they are desperate to win to keep alive their hopes of automatically qualifying for the tournament in Russia.

Thursdayâ€™s match was watched by a crowd of 4,503, including FIFA secretary general, Fatma Samoura, who has been visiting World Cup officials in Qatar.