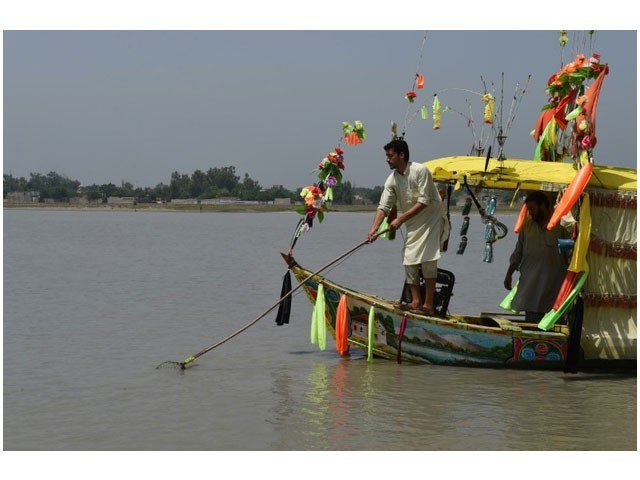 HAJI ZAI:Â Abbas Khan feeds a hot wire from a rickety generator into a river, a fishing technique he argues is more environmentally friendly than others used in northwest Pakistan â€” though he also admits it has killed several of his friends.

Hundreds of fishermen risk their lives daily to hunt the rare fish known as â€œsher mahiâ€, found in the Kabul River which flows from the Hindu Kush in Afghanistan into neighbouring Pakistan, before merging with the Indus.

Some swim for hours on inner tubes, dragging nets behind them. Others use more brutal â€” and illegal â€” techniques: spraying pesticides directly into the river or, like Khan, using the electric current from generators to stun the riverâ€™s inhabitants into submission.

And, for those in a hurry, there is always the brutal but effective â€œKhatin bombâ€ â€” dynamite.

These imprecise techniques are a threat to the riverâ€™s population, say dismayed conventional fishermen who have made their living selling sher mahi, considered the best for eating in Pakistanâ€™s northwest.

Like dozens of his fellow fishermen, the 58-year-old spends hours each day swimming the river on an inner tube, dragging his net behind him, catching only a few kilos at a time. He has done so for 25 years.

â€œNow, the fishâ€™s population has decreased and the main reason is an increase in fish hunting,â€ he says, emptying his net on to the shore. 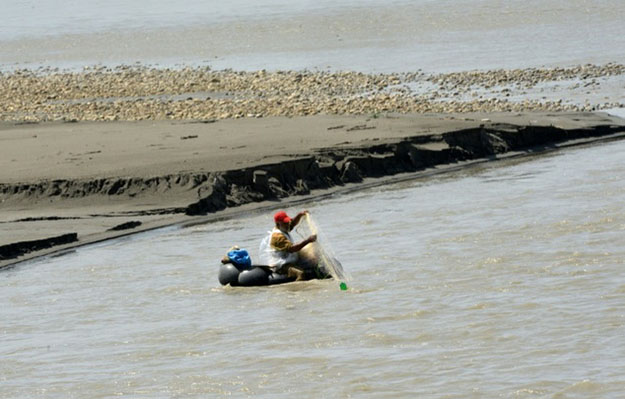 A fisherman uses a net to fish on the Kabul River, near Hajji Zai village in Charsadda District. PHOTO: AFP

Along the banks of the Kabul River hundreds of visitors can be seen enjoying family days of boating and wading, topped off with a hearty meal of fresh sher mahi and other river fish at dozens of huts and restaurants.

Sher mahi, with few bones and found in Pakistan only in the Kabul River, is similar to catfish, growing to a maximum of 30 centimetres (12 inches).

Some fishermen say its name come from the Persian word â€œsheerâ€, or â€œmilkâ€, due to its rich oily taste.

Speaking with AFP along the river, Khan admitted using a generator in the water was â€œscaryâ€ â€” but said that, despite his lack of safety gear, he has learned to correct the technique.

â€œSome of my friends had died because of electrofishing but now we have learnt it, now we know how to hunt in the best way,â€ he explained, before demonstrating how to attach wires to a metal rod then place the rod in a net in the water.

â€œSome people use pesticides for fishing but that destroys the entire population of fish. It also poisons the water and kills everything in the river, wherever it flows,â€ he argued.

Rehman and Khanâ€™s anxiety is echoed by other fishermen in Haji Zai, in the suburbs of the Khyber Pakhtunkhwa provincial capital Peshawar.

Fishing by dynamite was banned by authorities in 1982, but there was not a serious decrease until after the launch of a military operation in the adjacent tribal areas in 2009 made the explosives slightly â€” but only slightly â€” more difficult to get a hold of.

Fishing with generators and chemicals remains common, despite also being banned.

Khair Gul â€” known as â€œLarramâ€, or â€œScorpionâ€, an old childhood nickname that stuck â€” is mayor of Haji Zai village and himself an avid fishermen. Authorities, he says, are not serious about stopping poaching. 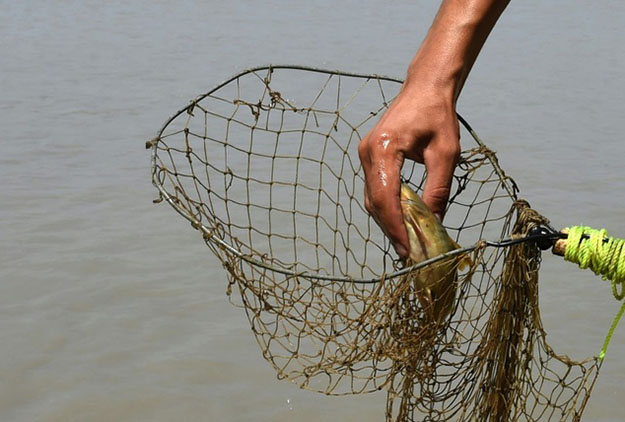 A fisherman collects a fish from a net after using a â€˜hot-wireâ€™ to stun his prey with an electric current in the Kabul River. PHOTO: AFP

â€œWe have taken action against such groups but the local officials used to set them free after taking (a bribe) of 400 to 500 rupees ($5),â€ he tells AFP.

â€œUse of dynamite, generator shocks and poisonous chemicals is not only a crime but also dangerous for health and causes disease. We ask the government to ban it completely,â€ he adds.

But the problems with a ban become obvious after speaking with officials.

A team of nine people covers the entire district of Peshawar â€” a more than 70-kilometre stretch along the Kabul River â€” with no vehicles, no boats, and no equipment, says senior government official Hidayat Shah, who works in governmentâ€™s fisheries department.

Somehow Shahâ€™s team managed to lodge cases against more than 60 illegal hunters from 2015 to 2016, confiscating some 23 generators â€” but, thanks to the molasses-like courts system, not a single case has yet reached a resolution.

In Charsadda and Nowshera the teams are less than half the size of that in Peshawar, another government official told AFP.

But time is running out, the fishermen say.

â€œIt will eliminate the entire fish population if this illegal hunting is not stopped,â€ fishermen Khad Gul told AFP.